‘The Black Sheep’ by Sophie Mackenzie 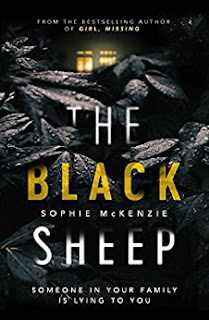 In this psychological suspense novel, Fran Hoffman, widowed with two children, Rufus and Ruby, attends a memorial service for her husband Caspian, a doctor who had died fourteen months earlier in a knife attack. The perpetrator had never been identified and the police had categorized the attack as random, possibly a mugging which had gone wrong. Fran had been devastated by her husband’s death but now feels it is time to move on and to start rebuilding her life but not with a colleague of her husband’s, the unattractive Simon Pinner who makes his sexual interest in Fran all too clear at the post-service reception. However, there is someone else at the reception who introduces himself as Harry Dunbar, a business acquaintance of her husband’s. He tells her that Caspian had told him he was being threatened, he thought by someone called Paul at the behest of Jayson Carr. This horrifies Fran because Jayson Carr is in fact Fran’s father. Jayson and Caspian had had their differences because Caspian, a non-believer, had performed occasional abortions while Jayson like most of the family was a devout Catholic and a vehement pro-life supporter. Apart from this, Jayson and Caspian had got on pretty well and after Caspian’s death Jayson and the other members of the close-knit family had supported Fran even though she had left the Church when young and rather wild and had never returned. At first Fran finds Harry’s warning farfetched but when she hears that Simon Pinner, who had also performed abortions has been murdered she thinks there maybe something in Harry’s warning especially when she discovers that Paul is actually PAAUL, the acronym of a Catholic pro-life secret organisation of which her father had been chairman. He insists that when PAAUL had become more extremist and advocated the assassination of abortion practitioners, he and his brother Perry, also involved with PAAUL, had left the organisation. But the more Fran investigates, the more her suspicions swing backwards and forwards. And were others involved? Is there a connection between the abortion which Fran had persuaded her much younger sister Lucy to have years before? Lucy is now obsessively devout but does she know about their father’s involvement with PAAUL? And if not their father, their uncle Perry’s role? And that of their father’s other brother Graham who also has broken away from the Church and is now a feckless alcoholic, divorced from his wife Sheila and estranged from his son, the handsome, charming Dex? And what about Harry himself? Fran is highly attracted to him and he to her but she discovers that he had never actually known Caspian, let alone received any confidences. But in that case who is he? Why is he interested in Caspian’s death and in PAAUL? Fran and Harry’s search for the truth leads to great danger for them both and for Ruby.

This is an intricate and cleverly plotted novel with an expertly planned narrative structure told from the point of view of Fran, Harry and Lucy in a way which ratchets up the mystery and the tension, while the dire effects of obsessive religiosity, particularly in such a close-knit family, are described in a way that is totally convincing.
------
Reviewer: Radmila May

Sophie McKenzie is the award-winning author of a range of teen thrillers, including the Missing series (Girl, Missing, Sister, Missing and Missing Me), Blood Ties and Blood Ransom and the Medusa Project series. She has also written two romance series: the Luke and Eve books and the Flynn series, which starts with the novel Falling Fast. Split Second is her first teen stand-alone novel in seven years. Sophie's first novel for adults is the psychological thriller Close My Eyes.