‘The Art of Breathing’ by Kate Evans 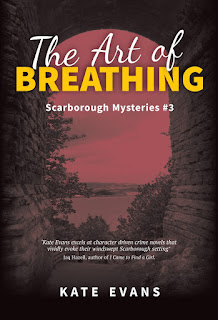 On Wednesday 19th May 2010 Hannah Poole and Aurora Harris attend an experimental film purporting to show the gradual demise of a cliff-top house on the crumbling Scarborough coast.  The film’s maker, Dr Hal Denver, lectures at the local university and the audience is predominantly made up of members of the academic community.  Spectators are shocked when the film appears to reveal a man’s face at one of the windows of the collapsing building as it slides over the cliff edge.  Hannah recognises the victim as Professor Harrison Peer, a distinguished scholar, whose absence from the gathering had earlier been the subject of debate.

This dramatic opening chapter proves, in fact, to be the mid point of the narrative which, in Chapter 2, shifts back eight days to Tuesday 11th May, 2010.  The device jolts the linear chronology of the story and allows the reader to consider the events leading up to the extraordinary impact of the film’s ending with that event still in mind.  The book then proceeds to describe how Detective Sergeant Theo Akande and his team approach the mystery of the absent professor - is the film really evidence of a murder or just someone’s idea of a digital prank?  He must work out how this central conundrum might, or might not, be related to a white van, counterfeit brandy, a spate of burglaries and some threatening letters.  The ramifications of the case are matched by the complex lives of the individuals involved and their relationships with each other, as the investigation opens up old wounds and tests loyalties.

The Art of Breathing is an appropriate title for a novel in which many of the characters feel displaced from society.  Through her descriptions of the sensual and essential act of breathing, such a reliable indicator of human emotions, the author evokes her characters’ responses to kindness and cruelty, tenderness and violence, safety and fear.  Nature, too, breathes through the novel; the weather, sea and sky are depicted in ways that show how they are able to calm, provoke and reflect the reactions and responses of the protagonists.  Kate Evans’ understanding of human psychology, she is a trained psychotherapeutic counsellor, is also evident throughout the text which is layered, nuanced and imaginatively constructed to create an enjoyably tense, fascinating and thought-provoking read.
------
Reviewer: Dorothy Marshall-Gent

Kate Evans is a writer of fiction, non-fiction and poetry. Her book, Pathways Through Writing Blocks in the Academic Environment, was published by Sense Publishers in 2013. She has an MA in Creative Writing from Sussex University and teaches on the Degree in Creative Writing at the University of Hull, Scarborough campus. Her crime fiction is inspired by Ruth Rendell, Minette Walters and Ann Cleeves. She is trained as a psychotherapeutic counsellor. She loves walking by the sea and afternoon tea, and has an inexplicable drive to bring a new generation to the poetry of Edith Sitwell.