‘The Wolf of Dalriada’ by Elizabeth Gates 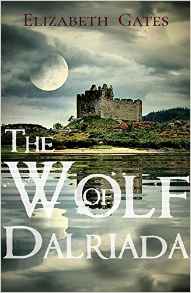 This romantic historical adventure, in a genre stretching back to writers such as John Buchan, Margaret Irvine, and Sir Walter Scott, is set in Argyllshire on the west coast of Scotland in the late eighteenth century at a time when the French Revolution was causing turmoil throughout Europe. It begins, however, some years before with a chance meeting between Malcolm Craig Lowrie, a young clan chief, then in exile, and the beautiful child Adele (or Adelaide) de Fontenoy at the court of the French queen Marie Antoinette. She befriends him; he never forgets her nor she him, although they do not meet again for 10 years. By that time she has been living with the elderly and corrupt English lawyer, Sir William Robinson, to whom Adele’s equally corrupt father had sold her in exchange for a gambling debt when she was a child. Since then, he has kept Adele in virtual isolation in his grand mansion in Argyllshire, Robinson Hall, apart from her priest, Father John Macdonald. She has so far violently repulsed Robinson’s advances. Now there is an unexpected visitor: Lady Emma Bamburgh who is fleeing from Malcolm Craig Lowrie whom she believes has murdered his cousin James Craig Lowrie whom she was about to marry. Emma, believing that Malcolm will murder her next, seeks refuge with Robinson who is an old friend of her father’s, the Earl of Bamburgh. Malcolm, ten years after his fateful encounter with Adele, is still a wanted man but is determined to protect his clansmen from the oppression of the Duke of Argyll, chief of the mighty Clan Campbell with whom Robinson is anxious to form a relationship profitable to himself. Malcolm’s ruthless vengeance for his people’s wrongs has earned him the name of The Wolf of Dalriada. Meanwhile the French Revolution has broken out and Adele fears that her father and her sister Gabrielle are in deadly danger. Will Malcolm and Adele find each other and fulfil their love? Will Robinson’s plans to marry Adele and to earn the favour of the Duke come to fruition? And what will happen to the Lady Emma?

Dalriada was a real kingdom in the first millennium AD which at its height ruled over much of the West Highlands and a portion of what is now Northern Ireland. Although it had come to an end by about 800 AD, no doubt the name lingered in legend in Argyll for centuries. The author uses it as a starting point for this, her first novel, which is a stirring historical romance which she tackles with immense gusto and a truly imaginative recreation of the period and the location.
------
Reviewer: Radmila May

Elizabeth Gates. Between reading English Language and Literature at Bedford College, University of London and acquiring an MA in Linguistics at the University of Essex, Elizabeth Gates explored Europe as a teacher of English and Creative Writing. She then went on to work as a freelance journalist for 25 years, published in national, regional and local magazines and newspapers specialising in Public Health Issues. When she's not writing, Elizabeth enjoys time with her friends and family, and travelling.