‘The Hanging Tree’ by Ben Aaronovitch 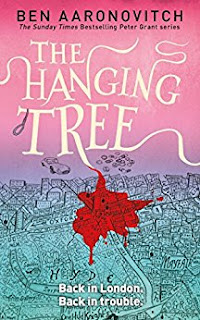 Another outing for Police Constable Peter Grant of the Falcon Squad, the highly unusual branch of the Metropolitan Police whose remit is to investigate possibly criminal situations which may involve the paranormal. The squad has only two members, Peter and his boss Thomas Nightingale, and their task is to keep the Queen’s Peace amid the strange phenomena which inhabit the streets of London (and elsewhere, see the review in Mystery People of Foxglove Summer), they being among the few humans who understand and can match the powers of those phenomena. However, this story begins with a request that seems straightforward enough: Peter’s girlfriend’s oldest sister’s daughter Olivia is being questioned by the police in relation to the death by a drugs overdose of her friend Christina Chorley and her mother wants her daughter kept out of the investigation. Not that easy to do, thinks Peter, even if her mother is Lady Tyburn, the goddess of the Tyburn River, now invisible but still flowing underground from Hampstead via Regent’s Park and under Buckingham Palace to the Thames, old Mother Thames being the mother of both Lady Ty and Peter’s own girlfriend, Beverley Brook, goddess of another hidden stream in south-east London. (The Tyburn River gave its name to the village of Tyburn and the two roads that met at the cross-roads, then Tyburn Road and Tyburn Lane, now Oxford Street and Park Lane respectively. Where the roads met at what is now Marble Arch was a place of public execution, the infamous Tyburn gallows, also known as the Hanging Tree, hence this book’s title.)

However, it was not at Marble Arch but in Knightsbridge, near Hyde Park Corner, in a luxury mansion flat where are situated the most expensive real properties in London, Number One Hyde Park, that the party took place and the death occurred. So Peter and Nightingale, along with Detective Constable Sahra Guleed, find themselves drawn into the investigation when it appears that Christina Chorley’s death may have been the result of magic. The investigation turns into a complete maelstrom involving a number of characters, some new to the series such as Christina’s father, a prosperous business man but also a practitioner of magic, others from earlier stories like the Faceless Man whose real identity is now revealed – but is it really? – and Lesley Ash who, although once a police officer, later chose ‘the dark side’.

And at the heart of all this is the search for a book, or rather a ledger, by the notorious 18th century thief taker Jonathan Wild whose false testimony resulted in many people dying on ‘the hanging tree’, a ledger which may contain documents written by Sir Isaac Newton who had, among his other achievements (notably the theory of gravity), an interest in magic.

Although I own to being confused  this did detract from my enjoyment of the book. There are so many characters, many (but not all) from earlier titles, and so much happening, often (but not always) from earlier titles, that readers who are unfamiliar with the earlier titles or who have read some of them but have forgotten much of what happened are likely to find themselves somewhat at sea. For my part, a search on Google led me to the fan website Follypedia wikia where there is a list of characters etc which was really helpful. And I also learned via Google that the series has been optioned for TV: standard police procedural meets Harry Potter films meets the more frenetic action sequences from recent James Bond films meets the more extravagant sci-fi/fantasy epics, and all saved from utter preposterousness by the author obviously not taking it all too seriously. If/when the series is filmed, I do hope the uniformed police officers wear helmets, and that the gigantic carnivorous unicorns from Foxglove Summer make an appearance. Should be fun.
------
Reviewer: Radmila May 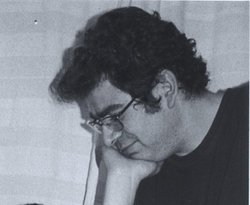 Ben Aaronovitch was born in 1964. Discovering in his early twenties that he had precisely one talent, he took up screenwriting at which he was an overnight success. He wrote for Doctor Who, Casualty and the world's cheapest ever SF soap opera Jupiter Moon. He then wrote for Virgin's New Adventures until they pulped all his books. Then Ben entered a dark time illuminated only by an episode of Dark Knight, a book for Big Finish and the highly acclaimed but not-very-well-paying Blake's 7 Audio dramas. Trapped in a cycle of disappointment and despair Ben was eventually forced to support his expensive book habit by working for Waterstones as a bookseller. Ironically it was while shelving the works of others that Ben finally saw the light. He would write his own books. Henceforth, subsisting on nothing more than instant coffee and Japanese takeaway, Ben embarked on the epic personal journey that was to lead to Rivers of London (or Midnight Riot as it is known in the Americas).
Ben Aaronovitch currently resides in London and says that he will leave when they pry his city from his cold dead fingers.