‘Kill or be Killed’ by Barry Johnson 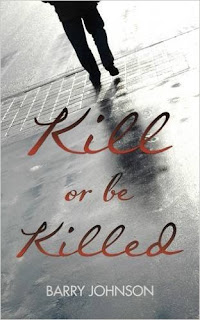 Jake Robinson appears to be down and out.  Supported only by his self-depracating sense of humour, he has lost his girlfriend and his job whilst working as part of an MI5 special unit.  Jake feeds his self-pity by thinking too much, and consoles himself by drinking too much; these indulgences have frittered away his savings and he now faces eviction from his luxury London apartment.  When he is unexpectedly offered a job as bodyguard for the actress Jan Lotus, it seems that Jake will finally be able to put his difficult past behind him, but the trouble is just about to begin …

This is a gritty thriller that takes the reader through an underworld where drug smuggling and murder are daily events and tough girls and guys take no prisoners.  Prepare for technical details about weapons, secret government departments and fiendish collusions between very bad people that leave you wondering whether there are any good people left in the world.  Jake lives in the fast lane and his fight against the global drugs industry means that those around him are often destined to become collateral damage.  He is the archetypal warrior, a swashbuckling, but lonely, alpha male whose loyalty to his undercover colleagues is exceeded only by his loyalty to the realm.

Barry Johnson has a background in the Royal Navy and a degree in psychology.  Kill or be Killed is the fifth in his series of Jake Robinson novels.
------
Reviewer: Dorothy Marshall-Gent

Barry Johnson began writing Greek stories after he retired in 2095. He published only one of these stories, but he thinks he will eventually get around to revisiting them. Barry uses his experience in the Royal Navy and his degree in psychology to help write his novels. Kill or Be Killed  is the fifth in his series featuring Jake Robinson, an ex-military policeman turned MI5 operative. Prior to the release of this instalment Barry has written: Wherein Lies Justice?, Staying Alive, Hunt The Killer and Saving A Lady, all published with The Book Guild. Barry, an owner/director of Learning Partners, has also published well over sixty professional articles.