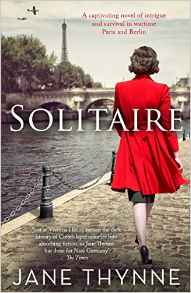 Published by Simon & Schuster,
17 November 2016.
ISBN: 978-1-4711-5579-6 (HB)
Berlin 1940 and Britain is now officially at war with Nazi Germany. Shortages are extreme and the authorities keep an ever stricter eye on the population while draconian penalties are metered out for infringement of regulations – for instance, listening to the BBC brings an automatic death penalty.
In this, the 5th Clara Vine novel, film actress Clara is still in Berlin and with the borders of Germany closed she cannot leave. Worse than this, she has been informed that her lover the British agent Leo Quinn has been shot and killed. It was Leo who had persuaded Clara to use her reluctant acquaintanceship with Magda Goebbels, wife of the infamous Joseph Goebbels, Adolf Hitler’s Propaganda Minister, to pass on to Leo any titbits of useful gossip she picks up from Frau Goebbels and the other wives of the Nazi leadership. And this Clara has successfully done on a number of occasions (see, for instance, the Mystery People review of the previous Clara Vine novel, Faith and Beauty). Now, however, devastated by grief at the news of Leo’s death and fearful that Goebbels suspects her double role, she has withdrawn into herself. All she cares about is Erich, the son of her friend Helga Schmidt who was murdered by her Nazi thug boyfriend (see the first Clara Vine, Black Roses); Erich, now old enough to be called up, would like to go into the Luftwaffe (the German airforce). And she is becoming involved with a young German orphan, Katerina Kempel, who has been in a state orphanage after the disappearance of her older sister Sonja. Then, an unexpected development: Goebbels, at the behest of the sinister Walter Schellenberg, head of the counter-espionage department of the SS, orders Clara to Paris to report on a German entertainer. But in her double role, Clara warns the entertainer of the possible danger he is in. Then Clara is ordered, again at Schellenberg’s behest, to go to Lisbon, capital of neutral Portugal. Once there she discovers that her task is to spy on the Duke and Duchess of Windsor (the Duke would have been King Edward VIII had he not renounced the throne to marry the thrice-divorced American Wallis Simpson). Just what is delaying the couple’s departure to the Bahamas? Their notoriously pro-Nazi sympathies? Or something else? And when Clara returns again to Berlin, can she use her acquaintance with Emmy Goering, wife of the Luftwaffe head, Hermann Goering, to ensure that Erich achieves his wish? And can she save little Katerina with her deformed foot from the all-too likely fate of those children deemed eugenically unfit to live?
If readers can suspend disbelief in the basic premise of all these novels, and the stories are so gripping it is easy to do so, each one is a great read, nor do they have to be read in sequence to understand what is going on. Clara is a heroine one can admire: apart from her ability as an actress to act a part convincingly, she has only her courage and intelligence to see her through. Although there are numerous characters in all the novels the fact that so many are real historical characters whose names will be known to readers helps to avoid confusion. Even Ian Fleming who was a wartime secret agent in Lisbon makes an appearance! At the end of the novel it becomes apparent that Clara’s own story is not over and I am looking forward to its successors, not only for Clara but for the many others with whom she becomes involved – will any of them survive? Recommended.
------
Reviewer: Radmila May

Jane Thynne was born in Venezuela and educated in London. She graduated from Oxford University with a degree in English and joined the BBC as a journalist. She has also worked at The Sunday Times, The Daily Telegraph and The Independent, as well as for numerous British magazines. She appears as a broadcaster on Radio 4. Jane is married to the writer Philip Kerr. They have three children and live in London. Find out more at www.janethynne.com connect with her on Facebook or follow her on Twitter @janethynne