‘The Scrivener’ by Robin Blake 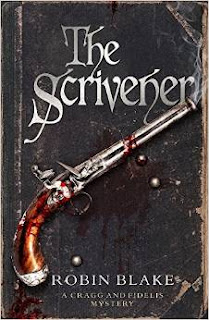 The year is 1742. Titus Cragg is Coroner for Preston, his good friend Luke Fidelis is one of the town's doctors, and both men are passionate upholders of justice. When local businessman Philip Pimbo is discovered dead, shot through the head, behind the locked door of his office, Cragg accepts that it is suicide but Fidelis believes it may be murder and convinces his friend to investigate further.
Pimbo was a pawnbroker who wished to be a banker. At the time of his death, Pimbo had taken much of the town's wealth to invest and the bullying Mayor of Preston, Ephraim Grimshawe, who authorised the loan, is harassing Cragg not merely to discover who killed Pimbo, but to discover what has happened to the money. Without it, the twenty-year festival that brings so much prestige and custom to the town will fall apart.

Cragg and Fidelis attempt to locate Pimbo's partner, a money-scrivener known as Zadoc Moon, but this vital witness proves to be strangely elusive. As they investigate, they find it hard to decide whether Pimbo's death is linked to the search for long-buried Civil War treasure or to the terrible evils of the African slave trade. Another death, which is indisputably murder, makes Cragg and Fidelis even more determined to discover the truth.

The Scrivener is the third book in the  series featuring Cragg and Fidelis, but the characters and situation are so skilfully drawn that it is easy to pick up the back story. It is a fascinating read, full of neatly inserted historical facts that add credibility to the storyline. The characters are warm, likeable and very human, but the author does not flinch from describing real and terrible injustices. I thoroughly enjoyed this book. It is a page-turner and I recommend it.
-------
Reviewer: Carol Westron

Robin Blake was born in Preston in Lancashire. There are three published mysteries in the series so far - A Dark Anatomy, Dark Waters and The Scrivener - and all are set in Preston during the 1740s. Cragg is the local coroner, who also practises as an attorney, and his friend Fidelis is a young physician with advanced ideas. There is nothing Dr Fidelis loves more than a challenging puzzle, but Titus Cragg is passionate for justice. In a society without a police force the two men operate as a formidable team, investigating suspicious deaths and often falling foul of the well-to-do merchant oligarchy that runs the town strictly in its own interests. 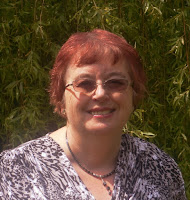 www.carolwestron.com
Posted by Lizzie at 13:52