‘A Spring Betrayal’ by Tom Callaghan 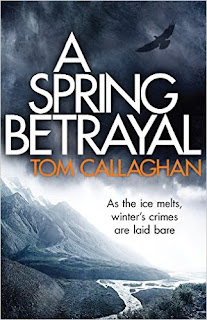 In this, the second in the writer’s Kyrgyzstan-set series, the opening is among the grimmest of any opening to any thriller. The protagonist, Inspector Akyl Borubaev, has, after solving the gruesome murders of young women in Bishkek, the country’s  capital, but also getting on the wrong side of various important people including his boss Minister of State Tynaliev, been exiled to Karakol in the far east of the country, a beautiful but desolate area. There is not much to do except grieve intensely for his recently dead wife Chinara. And then one day seven little bodies are found, wrapped in plastic bags. The only clues to their identity are plastic bands worn around their wrists showing that they come from an orphanage, an orphanage Borubaev knows – after all, abandoned by his parents and grandparents, he spent two years there. He has few happy memories of his time there but he does know that the Director, Gurminj Shokhunorov, cared greatly for the children in his charge. Gurminj is still Director and he tells Borubaev that the dead children are not those identified by the plastic identity bands: those children can all be accounted for. So who are the dead children? The pathologist Usupov, an old friend of Borubaev, knows of other dead children found with marks of physical and sexual abuse similar to those on the bodies of the seven buried children. But he warns Borubaev off further investigation – too dangerous for both of them. And then Gurminj is found dead, apparently by his own hand. A search of Gurminj’s office reveals a mobile phone number, that of Saltanet Usupova, a beautiful Uzbek undercover agent who featured in the author’s previous novel, A Killing Winter. What does that mean? The trail that the two follow uncovers pornographic films showing horrible sadistic cruelty to children. The people responsible for these films and distributing them to markets all over the world will stop at nothing, and Borubaev’s and Saltanat’s determination to make them answer for their evil crimes leads them both into danger.

Like the author’s previous novel, A Winter Killing, reviewed earlier in Mystery People, this novel is both beautifully written and very violent. Borubaev and Saltanat come across as real people; each is a mirror image of the other, horrified and deeply angry at the abuse inflicted on the child victims of the vile pornographic film industry. Their anger and horror has echoes in their own past and, since the crime and corruption which permeates the whole of Khirgiz society, as it does much of the former parts of the Soviet Union and modern-day Russia itself, means that there is little chance of bringing those responsible for the pornographic films to justice, they must do so themselves virtually alone. Hence the violence. True, Usupov is equally appalled by what his examination of the children and of others who have lain on his mortuary slab but he is understandably afraid to speak out while Gurminj suffers for his concern for the children. And while the other characters tend to the two-dimensional cardboard cut-out, given Borubaev’s first-person narrative, that is inevitable.

Highly recommended for those who can take the grim subject-matter and the violence.
-------
Reviewer: Radmila May

Tom Callagham was born in the North of England and educated at the University of York and Vassar College, New York. After graduating, Tom joined Saatchi & Saatchi, working for several years in London, New York and Philadelphia as a Creative Group Head, before joining the newly-formed M&C Saatchi. After living in Singapore where he pursued interests outside advertising, he moved to Dubai, where he worked as Creative Director for one of the region’s leading boutique agencies.
An inveterate traveller, he divides his time between London, Prague, Dubai and Bishkek