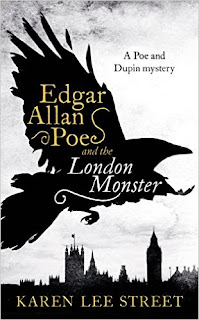 The fictional detective C. Auguste Dupin was the creation of the nineteenth century American writer Edgar Allan Poe. However in this remarkable novel, Poe and Dupin, the first of a proposed series, combine forces to unmask the perpetrator of a number of knife attacks on women in late eighteenth century London. In those attacks, which really happened, solitary women are stabbed in their buttocks and thighs. The perpetrator was known as the London Monster and was the subject of several ballads. A man was convicted of some of the attacks and imprisoned; there was virtually no evidence against him but the true identity of the perpetrator (or perpetrators) has never been established.

The novel begins in 1840 with Poe voyaging from his home in Philadelphia, leaving behind his beloved wife, to meet Auguste Dupin in London. Poe’s mother had died when he was a child and he was adopted into a prosperous family. When his adopted mother (‘Ma’) died, his adopted father (‘Pa’) married again but relations between him and his adopted father were not good especially after his father married again – Poe had expected to inherit some of his father’s wealth but instead only gets from his stepmother a box containing letters between his maternal grandparents, Henry and Elizabeth Arnold, both actors on the London stage in the late eighteenth century who had left London for the United States. The letters not only indicate the stormy relationship between the Arnolds’ but also describe the misdeeds of the London Monster indicating that the Arnolds were in some way connected to them. Poe thinks that the letters are forgeries, designed by his stepmother to cause him pain. He asks Dupin for his opinion. Then more correspondence between the Arnolds turns up, delivered to Poe’s lodging, the splendidly named Brown’s Genteel Inn. But Poe’s stepmother does not know his London address so how can she be responsible? And if not her then who? And Poe is being followed by a mysterious stranger – who is it? He and Dupin, having begun by investigating the mystery of the authenticity or otherwise of the Arnold letters, now find they are investigating another mystery as well. But are the mysteries in some way connected? And since Poe is heavily addicted to both drink and drugs, how much of what he experiences is real and how much delusionary?

This is about the cleverest book I have ever read and I am deeply impressed, beginning with the basic concept, in which a fiction writer meets his own creation who just happens to be the first fictional detective. The prose style is amazing: although the eighteenth century letters are in the somewhat flowery style then fashionable, they pale in comparison with the feverish Gothic style of Poe’s first-person narrative reproduced by the author in a way which comes across as being entirely authentic. Then there is the way in which the real-life story of the London Monster is taken up and elaborated so as to involve the Arnolds. Another clever touch is the way in which Poe’s writing is woven into the narrative: I’m not particularly familiar with his writing but even so, out of over 30 allusions, I recognised about 5. Poe addicts will probably recognise all or most of them. But this novel should appeal across a far wider field. Highly recommended.
------
Reviewer: Radmila May

Karen Lee Street was born in America, but has lived in London for a lot of her adult life. She recently moved to Australia. Edgar Allan Poe and the London Monster is her first novel.