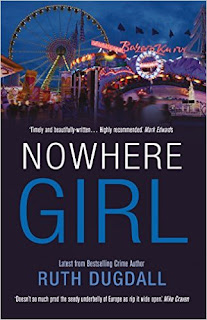 The country of Luxembourg may be small, attractive and apparently tranquil but nonetheless it is at the heart of the European Union. In late August the Schueberfouer fair is held in Luxembourg City. Among the crowds are Bridget and Achim Scheen and their daughters, 17-year-old Ellie and much younger Gaynor. Achim is German and has a job in Luxembourg; Bridget used to be a nurse and has worked in Algeria, among other places, with the medical charity Medecins Sans Frontieres. Ellie wanders off, comes back, and has a furious argument with her mother. She goes off again and takes Gaynor on the Ferris Wheel; Gaynor comes back but Ellie does not. She has disappeared. Brigid becomes frantic as does Achim. At first the Luxembourg police assume it is simply a demonstration of teenage rebelliousness and are slow to react; they are not anxious to publicise anything that might risk the reputation of Luxembourg. But as Ellie remains missing they begin their investigation. One of the investigating detectives is Olivier Massard, the boyfriend of probation officer Cate Austin who has featured in this author’s previous novels. Cate, who has moved to Luxembourg not just to be with Olivier after the end of her previous marriage but for reasons connected with her own family, has now resigned from the probation service. Cate’s daughter Amelia and Gaynor are friends and when Cate sees how distressed Bridget is and how slowly the police investigation is progressing she herself becomes involved. Meanwhile in Algeria, a young girl, Amina, is about to start on the long people traffickers’ route to Europe; this has been arranged by her mother who is anxious for Amina to get an education and escape the growing domination of the local Islamists including Amina’s own brother as is Amina herself. Eventually Amina, along with her friend Jodie, finds herself in a run-down part of Luxembourg and they both become involved in the events arising from Ellie’s disappearance, finding themselves drawn into the dark heart of the city’s underworld which underlies the somewhat kitsch exterior, as does Cate.

This is a very impressive novel with a strong and powerful theme involving not only people trafficking but also the damage that parents can unwittingly do to their children. As herself a former probation officer, Ruth Dugdall’s writing is clearly informed by her own experience of working with troubled children and vulnerable adults. Her first novel won the Crime Writers Association Debut dagger; I have not read that nor her other earlier novels but I look forward to doing so. Highly recommended.
------
Reviewer: Radmila May

Ruth Dugdall studied English at university and then took an MA is Social Work. Following this she worked in the Criminal Justice System as a social worker then as a probation officer. Part of this time was spent seconded to a prison housing serious offenders. She continues to work within the Criminal Justice System, most recently in Luxembourg. Ruth's novels are informed by her experience and are "authentic and credible".
Ruth's first novel, The James Version, is a historical fiction based on the actual murder of Maria Marten at the Red Barn in Suffolk. The story is re-told with a fresh light on who really killed Maria.  Her second novel, The Woman Before Me, won the Debut Dagger in 2005. It is the story of Rose Wilks, a female stalker imprisoned for killing a child, who claims to be innocent.  Her third novel, The Sacrificial Man, will be published in 2011. It is the story on an Internet suicide pact that goes wrong.  Humber Boy B, set in Ruth's birthplace Hull, was published in 2015 as was Nowhere Girl, which is set in Luxembourg. Apart from The James Version, all of Ruth's books feature probation officer Cate Austin. "Probation officers have more face-to-face contact with criminals than any other profession," she says, "they are the unsung heroes of the Criminal Justice System."