‘The Other Side of Silence’ by Philip Kerr 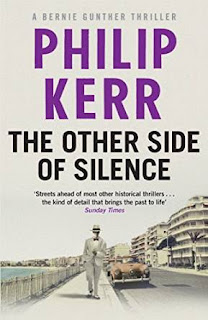 French Riviera, 1956. Bernie Gunther, the protagonist of the author’s ten highly popular novels, is now working under a false name as a concierge at a smart hotel in Cap Ferrat. He is exhausted and emotionally drained by his previous experiences in Nazi Germany before, during, and after the war. Now, with his wife’s (his third wife) leaving him to return to Berlin, he is so alone and depressed that he attempts, unsuccessfully, to commit suicide. The last straw had been the arrival at the hotel of a German calling himself Harold Heinz Hebel but whom Bernie recognises as Harold Hennig who had been responsible for the deaths of thousands during the last months of the war as the Russian army advanced into eastern Germany. Among the dead had been Irmela Schaper, a young woman with whom Bernie had fallen deeply in love and who is pregnant with his child. Bernie cannot forgive Hennig/Hebel and is appalled to see him, not only never having answered for his crimes but apparently highly prosperous.  Bernie’s only relaxation is playing bridge; he meets a handsome English woman, Anne French, and agrees to teach her. She for her part wants to write a biography of the famous writer elderly and reclusive Somerset Maugham who lives nearby and she hopes playing bridge will help her to gain access to him. But Bernie warns her that Maugham dislikes all women and will never grant her access. What does happen is that Maugham’s nephew Robin encounters Bernie and, having heard that Bernie plays bridge, asks him up to Maugham’s house. In fact, Maugham has a purpose in getting to know Bernie; Hennig, in addition to his Nazi past, is and always has been a blackmailer, using his knowledge of other people’s secrets to gain both riches and power. Now some photographs have come into his possession which indicate Maugham’s life as a homosexual, something about which the French are fairly broadminded but which in the UK was then a frequently prosecuted criminal offence; moreover Guy Burgess who recently has been revealed a Soviet double agent and who has defected to Moscow features in some of the photographs. Hennig has targeted Maugham who, knowing of Bernie’s past career as a detective, wants him to act as go-between Hennig and himself in such a way that Hennig will no longer be a threat to him. Bernie, who is desperate to leave where he is and try and make a new life somewhere – anywhere – else, agrees to act for Maugham for money. But things turn out to be not so simple particularly since Bernie whose remarkable prowess with women has been chronicled in earlier Bernie titles has begun an intense affair with Anne French. After all Bernie tells us that he is in remarkably good shape, despite being sixty-ish, putting on weight and losing a bit of hair, so why not? But should he smell a rat? And are there further ramifications involving the British secret services and other possible double agents?

The story is fast-moving with a complex plot. As with his previous novels, the author has meticulously researched the period about which he is writing. Bernie is still cynically wisecracking his way through life, while at the same time his thoughts reveal his deep inner unhappiness. Somerset Maugham and his cronies are excellently drawn. Fans of the series will be more than happy to read this title.
-------
Reviewer: Radmila May