‘The Powder Man’ by Paul Youlden 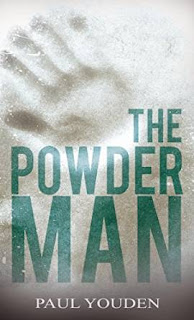 Peter Kingston is a young reporter on a regional weekly newspaper. His brief is to cover local news and proceedings in the magistrates’ court. He has always wanted to be a reporter and did well in his journalism training but what he finds himself doing is far from fulfilling his ambitions particularly since he cannot afford to move out of home but has to go on living with his conventional middle-class parents. His current girl-friend has her sights set on marriage and home-making. All in all, he feels intolerably constrained. The one excitement is when the local magistrates’ court hears an application for bail by one Nigel Ewell on a charge of dangerous driving. The application is opposed by the police on the grounds that other more serious charges against Ewell are being investigated. Ewell is in fact a well-known drugs smuggler and had been on the run for months until the dangerous driving episode. Peter discovers that there had been a victim of Ewell’s dangerous driving; more than that, the victim is a senior reporter on the sister newspaper to Peter’s paper and his injuries are serious.

Could this high-profile case be a break for Peter? Well, no. The sister newspaper, which is senior to Peter’s newspaper, wants the story. And then the case is transferred to London. End of story. So when Peter is offered the chance to write a series of travel articles, he jumps at it, especially since he has always wanted to travel having first discussed the offer with his former girlfriend Sue who is now working on a fashion magazine. Given the time of year (Christmas) he settles on Austria as a suitable first choice, and, having resumed his old relationship with Sue, asks her to come with him; she, having secured a commission from her fashion magazine also to write a travel article about Austria, agrees. They drive to Salzburg and their research goes remarkably well. So does their relationship. There seems to be nothing to arouse any feeling of uneasiness. True, they keep bumping into a group of four men, one of whom looks slightly familiar but Peter and Sue keep to their respective briefs. It is not until Sue has returned to England that it becomes apparent just who those men are and Peter finds himself in deadly danger.
------
Reviewer: Radmila May

Paul Youden began his career in journalism at the Kent Messenger and attended journalism college for four years. Once qualified, he became a senior journalist with the Kentish Express, rising to County News Editor. He then worked for BBC Radio (South East) and was headhunted by the Port of Dover, where he was in charge of press, PR and marketing. He remained there for twenty years, rising to Corporate Affairs Manager, but took early retirement in the 1990s to return to full-time writing, producing travel books on motoring and skiing, after which he set up his own travel website. With his wife's terminal illness, he had to give up many of his travels and cut back on his writing, but in 2014 attempted his first novel The Powder Man. He is currently working on the sequel.