‘Spare me the Truth’ by C J Carver 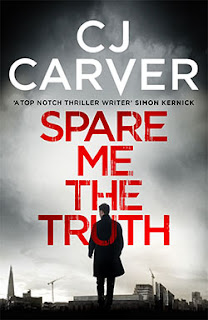 Dan Forrester is shopping in the supermarket with his daughter Aimee when he is approached by a woman who appears to know him. She says she used to work with him. He does not recognise her but remains polite. But as she persists in talking about people he doesn’t know and insisting that the life he lives now is a lie, his patience wears thin.   Following the tragic death of his son, and his subsequent breakdown five years ago, his wife Jenny has helped him get his life back on track. Now this woman tells him his entire family have been lying to him, and he brusquely brushes her aside.

So the opening chapter of this explosive thriller asks the questions. Who is Dan Forrester? Who is this woman who tells him a story of people and things her doesn’t remember? What does she want from him?

Grace Reavey, a GP, is committed to helping people. When she is told that she has to pay an enormous amount of money owed by her late mother she reels.  The threat is reinforced by a close friend who stands to lose everything and begs Grace to pay. But Grace doesn’t have the money.  Where would her mother have hidden such a huge amount of money and where and how did she get it.?

The lives of Dan and Grace cross. Both are struggling with the unknown, and both feeling that there is no one they can trust. Can they trust each other? Into this mix comes Detective Lucy Davies who has been forced to leave her former position in London owing to her unconventional behaviour. Desperate to prove herself, Lucy is a loose cannon seeking a killer.

This is an incredible roller-coaster of a read.  It seems that every page brings a new explosive shock that brings with it yet more questions.

Having read and enjoyed all the previous books by C J Carver I was excited and eager to read this new one and admit to high expectations.  She surpassed them all.  Brilliantly and intricately plotted, this is an on-the-edge-of-your-seat read as the story twists and turns with the efforts of three strangers to untangle the conspiracy in which they find themselves entwined.  Don’t miss it.
------
Reviewer: Lizzie Hayes

Caroline Carver was brought up on a dairy farm. At 18 she headed for the bright lights of London and four years later took a holiday in Australia which turned into a ten-year stay, working for the Sydney arm of several major international publishers. Between jobs, she travelled widely and adventurously: back-packing in South-East Asia on $10 a day for nine months, walking in New Zealand, trekking in Nepal and riding a camel through the Thar Desert are just a few of her travel experiences.
Her first novel Blood Junction won the CWA Debut Dagger and was selected by Publishers Weekly as one of the best mystery books of the year.