‘A Coin for the Hangman’ by Ralph Spurrier 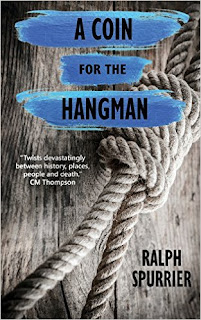 Writers of first novels generally play safe. Later in their careers, when they are well known, they may take risks with style, structure and content. Here is a striking exception. After a lifetime in the book trade as a salesman in Foyles, a rep with Macmillan and Gollancz, the founder of Post Mortem Books and a graduate of the creative writing course at Sussex University, Ralph Spurrier knows crime fiction well enough to subvert it – and with assurance. For starters, the author is in it. We learn in the first few pages about a find made in 1987 in a book collection – bought by Ralph Spurrier. He picks up the autobiography of the famous hangman, Albert Pierrepoint, and finds an inscription to the now deceased owner of the collection, Reginald Manley, one of the last public hangmen. From there a quest begins to learn more about Manley. His box of equipment is located and inside it along with straps and head-covering a mysterious journal apparently written by one of the last men to hang. Was Henry Eastman wrongly convicted and executed in 1953?
An intriguing premise, then, and you may think you know how the story will unfold. But then the persona of Ralph Spurrier steps back from the action and the plot is developed through a rapidly shifting chronology and setting: Southern Bavaria in 1939; Bradford on Avon in 1953 and at intervals through and after the war; the Normandy landings in 1944; Reg Manley’s East Dean home in 1953; Bergen-Belsen in 1945; postwar Bavaria. Even within the chapters there are frequent flashbacks. Bewildering at first, by stages the structure makes its impact through cross-references with a technique as effective as Kate Atkinson’s in Life After Life. Through it all, a strong story based on beautifully drawn characters emerges. As you would expect from an author so well-versed in crime fiction, there are some delightful asides about the books being read by the protagonists. Ultimately the time-scheme settles to the process of arrest, trial and execution. Worrying questions have emerged about the guilt of the prisoner – and this isn’t a spoiler, because we have known from the start that a miscarriage of justice may have taken place. Just as I hoped, surprise after surprise is sprung in the final chapters.
Be warned: this impeccably researched, compelling novel has some troubling scenes. But it’s a remarkable debut, rich in detail, strong in character and with a devious plot that will linger in the memory long after other crime stories are forgotten.
-------
Reviewer: Peter Lovesey 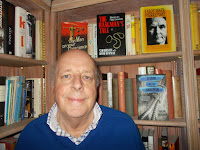 Ralph Spurrier Started Post Mortem Books  in 1979 as a way of financing his own collection, soon Post Mortem Books took on a life of it's own and by 1985 Ralph was in a position to go full-time into the second-hand book business. The business expanded to include new and all forthcoming books within the crime and mystery fiction field as well as military fiction. A Coin for the Hangman is Ralph’s debut book.
www.postmortembooks.com