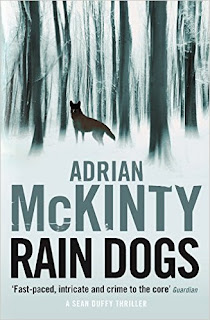 Belfast in the 1980s, the Troubles at their height. Winter, with the weather alternating between snow and rain, mostly the latter to the extent that Ireland seems likely to be washed away. Detective Inspector Sean Duffy of the Royal Ulster Constabulary, the protagonist of this and four earlier novels by this author, along with Detective Sergeant Alexander Lawson, is called to the ancient castle of Carrickfergus where the body of a young woman, an apparent suicide, has been found. He recognises her: Lily Bigelow, a young English journalist, whom he had encountered the previous day while looking into the theft of a wallet from a hotel room – not the sort of crime that would normally call for the involvement of a senior detective except that the victim was one of a party of Finns visiting Carrickfergus with a view to setting up a mobile phone factory, just the sort of investment that Northern Ireland needed in those troubled times, so much so that Chief Superintendent Ed McBain is also present. The wallet is soon found; end of story? Not altogether, although at first it seems that Lily's death must have been suicide and not connected at all with the wallet theft. After all, her injuries are consonant with a fall from a great height and although the caretaker was the only person present overnight in the castle there is no evidence to suggest that he or anyone else was involved. And yet, and yet . . . Duffy is not altogether convinced so is not surprised when the post-mortem indicates that she did not die at the time or in the way first presumed. Now the caretaker is the most likely suspect; even so there is no conclusive evidence.

Then McBain is killed by a car bomb, presumably the work of the IRA. Although Duffy is devastated by the news, as are all his colleagues, such events were all too commonplace at the time, and Duffy feels he must continue to try and find out what Lily was doing in Northern Ireland. As a journalist Lily would have had a notebook, but there's no trace of it. Duffy travels to London to make enquiries of her colleagues, one of whom comes up with a juicy titbit: Lily had paid a visit to Jimmy Savile, now known to be a serial child abuser, then famous as a pop celebrity and tireless charity fundraiser. Duffy also visits Savile but learns nothing concrete nor do his subsequent enquiries at a Northern Ireland boys' home or a visit to Finland to re-interview the Finns bear fruit. He can see the connections but there is nothing that amounts to sufficient evidence, not until the end when his own life is in danger.

I was very impressed with this novel. The breakneck prose style is well-adapted to the subject matter and the characterisation is convincing as is the depiction of the dangerous life of members of the Royal Ulster Constabulary. At the same time the break-up of Duffy's relationship with his much younger girl friend and his consequent distress is emotionally powerful. Recommended.
------
Reviewer: Radmila May 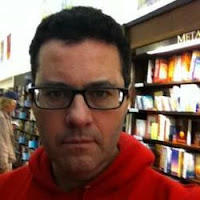 Adrian McKinty was born and grew up in Carrickfergus, Northern Ireland. He studied law at Warwick University and politics and philosophy at Oxford. In the early 90's he emigrated to New York City where he worked at various odd jobs with varying degrees of legality until 2001 when he  moved to Denver, Colorado to become a high school English teacher. In 2008 he emigrated again, this time to Melbourne, Australia with his wife and kids.