‘Paws for Murder’ by Annie Knox 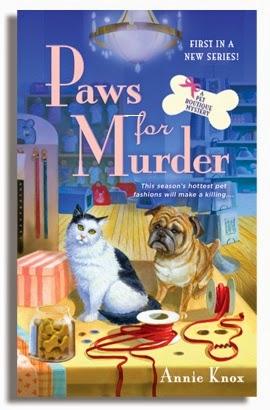 Izzy McHale is about to open her new pet boutique in her home town of Merryville, and she has good reason to feel anxious about its success: her elderly friend and landlady has backed her by subsidising her rent and her equally elderly aunt has put a large sum of money into stocking and opening the boutique. Also Izzy's friend, Rena, is the cook responsible for all the animal food sold in the boutique, and has worked as hard for its success as Izzy herself has done. Izzy's self-esteem is still very low after she was dumped for another woman by her long-term boyfriend, whom she had supported through college, subordinating her own fashion designer career to his medical ambitions.

As she struggles to open the boutique, Izzy has a lot to deal with, including an irascible next-door neighbour who owns an antiquarian bookshop. Richard Greene believes that the proximity of animals will damage his trade; and is willing to use any legal means to close down Trendy Tails. And then there is Priscilla Olson, owner of Prissy's Pretty Pets, an old schoolmate of Izzy, who will stop at little to get the better of a rival.

The last thing Izzy needs is for local activist and spoiled heiress, Sherry Harper, to wage a campaign against Trendy Tails but, despite her pleas, Sherry turns up and starts picketing the party to celebrate the shop's opening, waving a painted sign bearing the words 'NAKED IS NATURAL.' Izzy has little success in persuading Sherry to leave but Rena manages to do so, and it is clear that in the past Sherry has done something to Rena of which she is still ashamed and that Rena has not forgiven. Towards the end of the party, Izzy goes out to dump the rubbish and finds Sherry lying dead next to the bins.
Sherry has been poisoned and Rena becomes the police's main suspect. Rena calls in Sean Tucker, to act as her lawyer. This unsettles Izzy: she, Rena and Sean had been very close friends throughout school, until Sean had announced his love for Izzy and she, infatuated by another boy, had rebuffed him. Izzy and Sean have hardly spoken since that day. Now Sean is a successful attorney and has a new girlfriend, Sherry's cousin, Carla.

Together Sean and Izzy set out to clear Rena, aided by a gang of much-loved pets. They discover many people who had good reason to hate Sherry before they reveal the truth behind her murder.

I started this book with a slight reservation in my mind regarding the pet boutique setting but within the first few pages I was hooked. Izzy is a delightful heroine, both vulnerable and courageous, with a wry sense of humour and a genuine love for animals. Her friends and family are warm and funny and the author does an excellent job of characterisation with all the characters. In this book nobody is perfect but also nobody is totally evil. The mystery is engaging, with a plentiful supply of red herrings and a peppering of clear, honestly laid clues.  Paws for Murder is a real page turner. It is the first book in a new series, which I predict could have a long and lively run.
------
Reviewer: Carol Westron 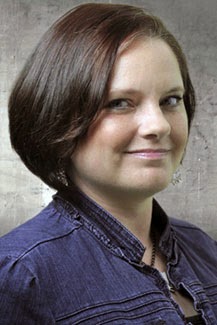 Annie Knox doesn’t commit–or solve–murders in her real life, but her passion for animals is 100% true. She’s also a devotee of 80s music, Asian horror films, and reality TV. While Annie is a native Buckeye and has called a half dozen states “home,” she and her husband now live in a crumbling historic house just a stone’s throw from the courthouse square in a north Texas town.
http://annieknoxauthor.com/ www.carolwestron.com
Posted by Lizzie at 21:30