Interview with the Deadly Dames 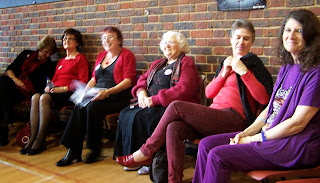 The Deadly Dames are a group of cosy crime authors: Charlie Cochrane, Joan Moules, Eileen Robertson, Nicola Slade and Carol Westron and they love to talk about crime fiction. I caught up with the five of them, plus honorary ‘Dame for the Day’ Leigh Russell, at the  Havant Literary Festival on the 6th of October.

Stevie: Which Dame are you (Sporty, Scary, Ginger, Baby, Posh or something else)?
Charlie: I suppose technically I’m Baby, although I think Joan should be that because she has such a young girl’s face. I’ll be sporty, for the obvious reason that I can’t resist watching or listening to sport whenever I can.
Joan: Dizzy Dame (that’s what my husband calls us, the Dizzy Dames!).
Eileen: Scary Dame.
Nicola: I’d like to be Scary Dame.
Carol: As the bossy moderator I guess I’d be Scary Dame.
Leigh: I’m a Scary Dame!
(That's a lot of Scary Dames there!)

Stevie:What’s your sub-genre (in 3 words if possible)?
Charlie: Cosy Edwardian gay.
Joan: Mystery Romantic Fiction.
Eileen: Comedy crime.
Nicola: Mystery with history.
Carol: Contemporary police procedural.
Leigh:Psychological Suspense.
(And a wide variety of sub-genres for you all to choose from!)

Stevie: What’s your latest release? What’s it about?
Charlie: Lessons for Suspicious Minds, which is an Edwardian country house type of mystery with my sleuths, Jonty Stewart and Orlando Coppersmith, having two mysterious suicides-which-might-just-be-murders to look into. The twists in the tale don’t just come in the storyline – my amateur detectives are both fellows of an august Cambridge college, and madly in love with each other. Not easy in an age when their love dare not speak its name.
Joan:  Turn of the Tide, which is about surrogacy: Tim is easy-going and contented but Katie refuses to be thwarted in her desire to move up in the world. Her drastic solution to finding money to fund the first steps on the property ladder though rebounds on her with devastating effects. Meanwhile Gordon and Maureen move to the affluent area of the South Coast town with their small baby when Gordon’s firm relocates from London.
Eileen: We’ll Be Watching You, which is based on Aesop’s Fables, and the story of ‘Cry Wolf’. When Neighbourhood-Watch-obsessed Christine sees a supermarket robbery, no one will believe her.
Nicola: Forthcoming (31st Dec 2013) is The Dead Queen’s Garden, the third in the Charlotte Richmond series and set in 1858; the young widow, Charlotte, has lately found herself tripping over the occasional corpse, but surely the festive season, beginning with a christening party, can’t present the same hazard? There are some strange incidents and a death, apparently from natural causes, that leaves Charlotte puzzled and anxious over questions that seem to have no answers. Over Christmas, she manages to learn a surprising amount about mediaeval gardening, some unusual and unpleasant ailments, London property values, and how to conduct a rat-hunt. To cap it all, Boxing Day finds the resourceful Charlotte in a garden dedicated to a long-dead queen, fighting for her life and armed only with what is possibly the least likely weapon ever.Carol: The Terminal Velocity of Cats, in which archaeologist turned Scene of Crimes Officer, Mia Trent, is summoned by Detective Inspector Oliver Sutton to examine a pit of bones that have been turned up by a digger on a building site. Amongst numerous cat bones, there is a human body, and the skull has modern dentistry. Newly arrived in the area, Sutton is hampered by resentment and obstruction from most of the C.I.D. team, but Mia likes him. Together they solve the crime that led to the body in the pit of bones, but Mia’s presence at the crime scene has attracted the attention of a relentless and vicious killer and soon she is in danger of becoming his next victim.Leigh:  Cold Sacrifice, which is the first in the Ian Peterson series, a spin-off from the Geraldine Steel series: When three dead bodies are discovered in quick succession, DS Ian Peterson becomes too busy with a complex murder investigation to worry about his deteriorating marriage. From middle class housewife to prostitute, there seems to be nothing to link the victims, and no clue to the killer’s identity. Meanwhile Stop Dead, released June 2013, is the 6th book in the bestselling Geraldine Steel series: when a businessman is murdered, the police suspect his glamorous wife and her lover. Then the victim’s business partner suffers the same gruesome fate. The only clue is samples of DNA that lead to two women: one dead, the other in prison.


(More titles for the Wish List? Incidentally, Women and Words regulars, Geraldine's sergeant in London is a lesbian, first appearing in Death Bed. Maybe she'll get a spin-off series eventually too.)

Stevie:If you could take two of your characters anywhere, where would you go, who would you take and who would you absolutely not tell your travel plans to?
Charlie: Jonty Stewart (from the Cambridge books) and Rory Carter, my very well bred werewolf (from Wolves of the West). Both of them men you could depend on in any situation and who’d be excellent company. We’d go to Jersey (old not New) of course, for the beaches and the castles and the excellent restaurants. I wouldn’t tell my weresloth character (from ‘Sollicito’ in Lashing of Sauce) as he’d come along and shift into sloth guise. That would either be endearing or totally revolting depending on the slothy things he’d be doing at the time.
Joan: Annie and Johnny from my book Tin Hats and Gas Masks. Where – On a cruise or to the seaside (they could argue it out between them). I’d definitely not take Annie’s mum.
Eileen: I’d take Christine and Harry off to New Zealand, but I certainly wouldn’t tell Alun.
Nicola: I’d take my two protagonists, Charlotte Richmond (the Victorian widow) and Harriet Quigley (a contemporary former headteacher) to a fabulous hotel where we’d have great food and drink and talk non-stop. I’d have to hope they managed not to trip over any corpses while we were there. Far too many unreliable characters to choose from when it comes to not telling!
Carol: I’d take Mia and Oliver Sutton to a Greek island, which would be fun for an archaeologist, and maroon them in a small village together so that they could sort out how they felt about each other away from the speculative eyes of their colleagues. I definitely wouldn’t tell D.C. Liz Murphy or D.S. Dave Bycroft, who’d use their knowledge to make trouble.
Leigh: I would go to a Greek island with my protagonists Geraldine Steel and Ian Peterson and spend time really getting to know them both. I wouldn’t tell anyone!
[Some more great stories in the making there?]

The Deadly Dames are happy to give talks to writers’ groups, libraries, bookshops and any group that loves to read or talk about mysteries. They can be contacted via Mystery People (www.mysterypeople.co.uk). Not sure whether they’ll cross the Atlantic to talk to you, but you never know…
[I'd recommend you go and see them separately or as a group, because they're all jolly entertaining.]
------
Stevie Carroll was born in Sheffield, England's Steel City, raised in a village on the boundary of the White and Dark Peaks, and nourished by a diet of TV drama and science fiction, along with books, most notably Diane Wynne-Jones and The Women's Press, from the only library in the valley. Stevie's first solo collection, A Series of Ordinary Adventures was published by Candlemark and Gleam (www.candlemarkandgleam.com) in May 2012. Stevie blogs regularly at Women and Words, reviews books at The Good, the Bad and the Unread  and waffles about writing and life on Livejournal