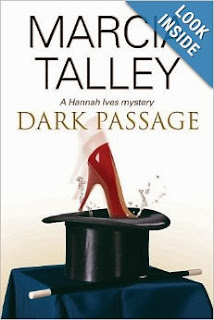 This is the latest in the ever popular Hannah Ives series. Here Hannah and her sisters decide to take some time away from their families and book to go on a girl’s cruise from Baltimore to the sunny Caribbean climate. Julie, Hannah’s fourteen year old niece is also invited to go.
Talley wastes no time in starting the drama, on the first night of the cruise the bubbly barmaid, who also assists the famous cabaret magician, Pia Fannuci, has a dangerous escape from injury. All is made light of, but then it is Julie’s turn, and then she disappears. Panic spreads among the sisters as they start a desperate search to find her, given that if she is nowhere on the ship she could only have gone overboard. Hannah then meets another passenger, David Warren, who is on the voyage to discover what really happened when his twenty-two year old daughter disappeared without a trace on another of these cruises. It seems too, that no official cruise directors, or ship staff, are taking any of these disappearances seriously, so why? Hannah and David they set out on a desperate search to find Julie before the short cruise comes to final port. The tension builds as disembarkment gets closer and more suspects emerge. Will Hannah get to the bottom of the truth of these girls?

This is a well-written story, satisfying in both the plot and outcome. It is exceptionally well researched. I get the feeling Talley has cruised quite a lot as one can almost feel the movement of the large liner and the smell of the sea as we turn the pages and Talley draws us further into the plot. A good read with characters you are happy to journey with and well-plotted.
------
Reviewer: Linda Regan

Marcia Talley was born in Cleveland, Ohio, but spent the first eighteen years of her life bouncing about the planet -- from Ohio to California, China, New York, Virginia, Kansas and Taiwan (sometimes more than once) -- as the eldest of five daughters of a career Marine officer.