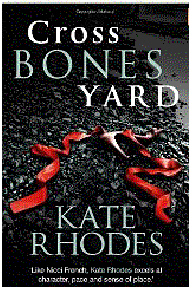 Psychologist Alice Quentin is approached by DCI Don Burns of Southwark police to visit Morris Cley who is being released from prison the next day owing to a technicality.  What Burns wants to know is how much of a threat to society is Morris Cley.

A few days later running off a difficult telephone conversation with her boyfriend Sean, who is making her feel suffocated, Alice finds a body at Crossbones Yard, now a waste ground partially cleared, which was the site of Crossbones Cemetery where over a thousand prostitutes where buried between the 1850’s and 1994.

Later DCI Don Burns contacts Alice to look at the body as he says the wounds are similar to those on the victims of the murders committed by Ray and Marie Benson and he suspects Morris Cley. Cley’s mom was close friends with Ray and Marie Benson who had killed 13 women before they were caught, tried and imprisoned. Five of their victims were never found. Then Don Burns brings in DS Alvarez, the bad-tempered detective whom Alice had met the night she found the body, a man with a permanent scowl, who feels that Alice maybe able to help.

In the midst of this Alice is dealing with her brother Will who is bi-polar and lives in a van in her drive, refusing to move into the house. Will is unpredictable alternating between docility and violent episodes.  Into this uncomfortable situation arrives her friend the actress Lola who despite being exotic and excitable seems to be able to calm Will.

Soon the letters start and then another body - someone Alice knows, so is the killer someone close to Alice?

The book is beautifully written with many atmospheric descriptions of London. Alice is an interesting character with issues, the history of which is slowly revealed to the reader as the book progresses.  This is a fast paced compelling story that has a stunning climax that left me reeling. I just didn’t see it coming.  Put this on your ‘must read’ list.
----
Lizzie Hayes

Kate Rhodes was born in London. She has a PhD in modern American literature and has taught English at British and American universities. She spent several years working in the southern states of America, first in Texas, then at a liberal arts college in Florida. Kate is currently writing full-time and lives in Cambridge with her husband Dave Pescod, a writer and film maker. Crossbones Yard is Kate’s first crime novel. The second novel in the Alice Quentin series, A Killing of Angels will be published in June 2013. www.katerhodes.org