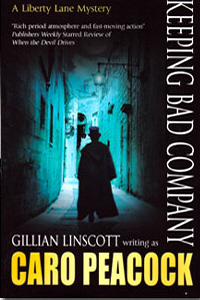 It is London 1840 and Liberty Lane Private Ivestigator is sipping champagne at a diplomatic gathering. But Liberty is not there in a purely social sense, but to carry out an assignment on behalf of Mr Disraeli.  All is going according to plan until the appearance of her brother Tom Fraternity Lane.

Tom works for the East India Company and has returned to England unexpectedly, as he has been called to give evidence in the enquiry into the murder of a wealthy merchant’s assistant, whose throat was cut on route to Bombay carrying a consignment of jewels.   Whilst Tom disapproves of Liberty’s career as a Private Investigator and seeks either to take her back to India or marry her-off to a socially acceptable man – both actually, his discomfort in his position between the East India Company and his friend Mr Griffiths, has him confiding in her. When another murder takes place, against his better judgement Tom finds himself embroiled in Liberty’s determination to seek the truth of the situation.  There is much political intrigue and dubious dealings and in the course of her investigations Liberty finds herself crossing swords with an old and most unpleasant enemy.

I liked Liberty enormously, also her prickly independent friend and assistant Tabby. The methods employed by a lady of her social standing to extract information I found fascinating.  Like all good mysteries no one is quite what they seem, and there is an unexpected twist at the end.

This is the fifth in the series featuring Liberty Lane, and I will now make a point of reading the earlier books. Highly recommended.
-----
Lizzie Hayes
Earlier books in the series are: A Foreign Affair, A Dangerous Affair, A Family Affair and When the Devil Drives.

Caro Peacock has another identity. As Gillian Linscott she is the author of the award winning series about the suffragette detective Nell Bray.  There are eleven books in the series.
Caro lives near the Welsh Borders