‘A Room Full of Bones’ by Elly Griffiths 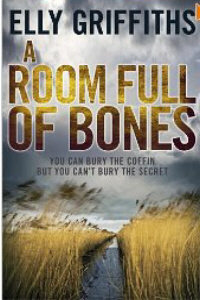 Published by Quercus,
19th January 2012.
ISBN: 978-1-84916-366-8
Dr Ruth Galloway, Head of Forensic Archaeology at the of , is due to attend the opening of the coffin of a medieval bishop at the local museum in .  Ruth arrives early only to discover the museum’s curator dead on the floor beside the coffin.
The museum is owned by Lord Smith who also owns the nearby racing stables. As DI Harry Nelson investigates, a number of threatening letters come to light demanding that the museum’s collection of Aboriginal skulls brought back to the UK by Lord Smith’s explorer grandfather are returned to their native land.  The group call themselves The Elginists who want the skulls returned to their spirit land so that they can enter the Dreaming, explains Ruth’s friend Cathbad, who unsurprisingly is a member of The Elginists.  Cathbad has featured in all the earlier books in this series but I liked him more in this book – he is growing on me. Ruth asks to see these skulls and is amazed when she is shown into a room literally full of bones, the description of this airless room full of bones was unnerving - the sort of thought that sends a shiver down ones spine.

Although a modern day mystery, there is much that is fey about this tale, as the writer weaves beliefs of the past into the present day, I became utterly absorbed as the story unfolded.
There are several unexpected events in this book that move Ruth’s life into a different sphere, whether they are permanent or temporary does of course have this reader eager for the next instalment.  Another wonderful entry in this justifiable highly acclaimed series.
-----
Lizzie Hayes 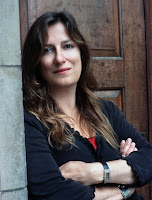 Elly Griffiths is the author of a series of crime novels set in ’s county and featuring forensic archaeologist Ruth Galloway. The first in the series, Crossing Places, earned a good deal of praise both in ’ native country, , and in the The Literary Review termed it “a cleverly plotted and extremely interesting first novel, highly recommended.  Since then Elly has written three further novels featuring forensic archaeologist, The Janus Stone, The House at Seas End and this latest book A Room Full of Bones.
Posted by Lizzie at 19:32