‘Legacy of Blood’ by Alex Connor 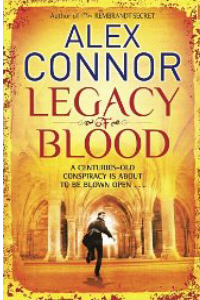 Published by Quercus,
19 January 2012.
ISBN: 978-1-84916-362-0
In 1732, Polly Gunnell has become notorious as a model to Master William Hogarth, the famous painter. But cocking a snoop at the world through William Hogath’s art has brought plump pretty Polly to a violent end - she and the boy child, both left for dead, to be buried by William Hogarth.
Centuries later Australian millionaire Bernie Freeland, has invited a select number of art dealers to fly back to from on his private plane. The flight has just seven passengers, including three of the best escorts in the business - one with a sense of humour, which results in a disclosure that brings death to a number of the passengers within a short time of landing.
This is a story of loyalty, greed and survival, as the guardians of a painting protected for three hundred years becomes sought after by a number of unscrupulous buyers.
Legacy of Blood is an intricate conspiracy mystery that twists and turns at an amazing pace. The flash backs to the 1700’s are related by William Hogarth, but the present day narrative is by Sir Oliver Peters, and by Victor Ballam  a disgraced art dealer, just released from prison, who is retained to find the painting.  As the story progressed I could not see how the story would pan out. As a long-time reader of crime fiction I can often see generally where a story will end, but this one had me totally foxed.  The end is quite simply stunning – an unexpected take your breath away ending, that I didn’t for a moment foresee.
Cleverly plotted, Alex Conner is a gifted writer and I am eagerly awaiting her next book.
-----
Lizzie Hayes

Alex Connor  is an art historian and working artist.  Her interest in painting and art history has now sparked her interest in writing thrillers set in the art world. The first was The Rembrandt Secret about Rembrandt; the second has just been published, Legacy of Blood, is about Hogarth, and the third is to be published in August 2012 about Goya. Alex first started painting and writing after she was stalked and beaten up. During her convalescence she studied hard, and finally reached the point where she was able to write about all her passions, bringing in her insider knowledge. In order to get into the mind set of the artist about which she is writing Alex paints one of their pictures. She painted Rembrandt’s Old Woman, when she was writing The Rembrandt Secret, and did a copy of Hogarth’s Self Portrait when she was writing Legacy of Blood.
Alex has talked on TV and Radio about many facts that are new to the public. She was a presenter on This Morning for a strand called PAST MASTERS which was based on her non fiction book on art The Wrong Side of the Canvas which was published in and about artists’ lives.   For more details about Alex visit her web site
www.alexconnor,com
Posted by Lizzie at 14:18