‘The Flight’ by M R Hall 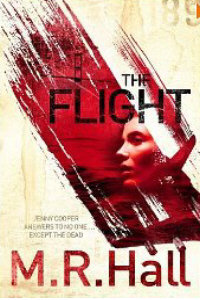 Published by Mantle,
17th February 2012.
ISBN: 978-230-75491-1 (Trade Paperback)
When Ransome Airways Flight 189, bound for with 600 passengers and crew on board, plummet’s into the Severn Estuary shortly after leaving Heathrow, it falls into ’s Coroners jurisdiction, but two bodies wash up in the jurisdiction of Severn Vale District Coroner Jenny Cooper.
Jenny is currently investigating an unexplained fatal car accident, and along with her current case load is relieved that she doesn’t have the job of ca 600 bodies to deal with.  And when she is contacted by her immediate boss to transfer her two bodies to the temporary D-Mort (Disaster Mortuary) that has been set up in , she puts matters in motion to effect the transfer.  But her initial inspection of the bodies throws up the fact that one of the bodies was not a passenger on the fated airliner, but a sailor in the wrong place at the wrong time, the other is that of a ten-year-old girl.
The crashed plane is the world’s largest commercial airliner the Airbus A380, designed to carry five-hundred and twenty-five passengers in a normal three class configuration - Ransome Airlines had managed to squeeze in closer to six hundred.  As you will surmise a crash of such magnitude demands extensive investigation as to what happened to this airplane that has a sophisticated network of computers and electronics. And the relative investigation bodies swing into action with alacrity.
This is a David and Goliath story, as Jenny Cooper continues to conduct her own investigation even when warned off. This screams to her ‘cover-up’ and we are with her all the way.  Whilst she is under pressure from her boss to leave matters alone, she also has to deal with the grieving mother of the ten-year-old dead girl, who brings some big guns to pressurise Jenny.  Not to mention the continual disapproval of everything she does by Alison Trent her own officer.
Apart from an intriguing mystery and interesting facts about air travel, there is some marvellous characterisation, I loved Detective Inspector Williams who will do anything to get one over ‘the bastard English’.
One of those books that you can’t put down, or turn the pages fast enough to find out what happened next.  Don’t miss it.
-------
Lizzie Hayes

M R Hall was born in in 1967 and educated at and , .  He is a Bafta nominated screen writer, producer and former criminal barrister.  His debut novel The Coroner, was published by Pan Macmillan in the in 2009 and was nominated for the Crime Writer’s Association Gold Dagger for best first novel. Since then he has published three further books featuring Coroner Jenny Cooper, The Disappeared, The Redeemed, and this latest book The Flight.  Matthew lives with his wife and two sons in the Wye valley in and spends much of his spare time looking after his sixteen acres of woodland and working for the conservation of the countryside.
Posted by Lizzie at 12:59