‘A Narrow Return’ by Faith Martin 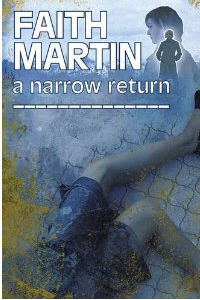 Published by Robert Hale & Co
29th February 2012.
ISBN: 978-0-7090-9476-0
A Narrow Return is a welcome return for this reviewer. I have greatly enjoyed the vicissitudes’ of DI Hillary Greene over the last ten books and felt mighty sad when she retired, upped anchor and chugged away in her narrowboat, see A Narrow Exit. But here she is back in her familiar part of the canal, and how glad I am.
Her old boss Superintendent Marcus Donleavy is delighted to have her back and has assigned her as a consultant to the Crime Review Team headed up by Superintendent Steven Crayle,  who sounds as sexy as Paul Danvers who had fancied Hillary for years but has now moved on.  But Steven Crayle has his sights set on fast promotion, and aware of Hillary’s high success rate in catching criminals doesn’t want to be overshadowed, so he gives her a really cold case, the murder of Annie McRae more than twenty years ago, found dead in her home in the village of Chesterton in June 1991, by her thirteen-year-old daughter Lucy.  Steven is confident that there is no way she could possibly solve the case.  Indeed as Hillary reads the case notes and interviews the family she is aware that the SIO who lead the investigation team DI Andrew Squires appears to have had conducted a fair and through investigation.
Soon Hillary has sorted her team and found a like mind in James Jessop, as she digs deeper into the background of the McRae family.  Although thrilled to be back at work all is not plain sailing for Hillary, she has acquired a stalker.
I read this in one sitting, couldn’t put it down.  I applaud the author’s foresight in retiring Hillary Greene only to bring her back in a completely new set of circumstances, giving her a different job and a new team.  Whilst we have a complete story here, the author has also left a couple of tantalising hooks to keep me eager to see what happens next for Hillary Greene.
----
Lizzie
Faith Martin is an English author who was born in . She currently is living on a narrow boat, and is best known for writing a series of books set around Oxfordshire, with the starring character being DI Hillary Greene. Hillary Greene lives on a narrow boat, and this is a link to why all of the books in her series - currently 11 - have the word 'narrow' in the title
Posted by Lizzie at 17:36