‘The Cadaver Game’ by Kate Ellis 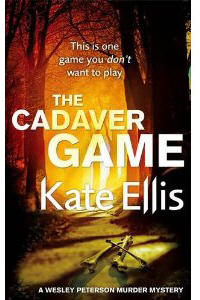 Published by Piatkus, February 2012.
ISBN: 978-0-7499-5367-6
An anonymous telephone call points the police to the discovery of a dead body at a cottage in Morbay.  The place is rented to a Tessa Trencham but the body has been lying there a while, and the maggots have been busy so visual identification is not possible.  Investigating are DI Wesley Peterson and his boss DCI Gerry Heffernan. Whilst they are seeking dental records, the bodies of two teenagers are found naked and shot.
Always short of money for his digs archaeologist Neil Watson, Wesley’s university friend, has reluctantly accepted a bizarre commission from an artist, who has permission from the son of the owner of Catton Hall to dig up a ‘Feast of Art’ in one of his fields, but Neil is having a hard job, keeping his volunteers motivated.
Running along side the current investigations is a separate story of manhunts in 1815 and related through two journals, one kept by John Tandy, a jester and the other by Christopher Wells, steward to Squire Edward Catton, an ancestor of the curent owner of Catton Hall.
Searching for a motive for the killing of the teenagers, Wesley discovers that they were both playing an online game, Blood Hunt.  Could they be playing this online game for real?  And if so, who is the organiser?
Intricately plotted this is an absorbing tale, as the past merges into the present.   Who could be running human hunts?  How fascinating is it that history could be repeating it self.
A dual tale of human hunting that gives us pause for thought. Can this happen today?
Highly recommended.
-----
Lizzie Hayes 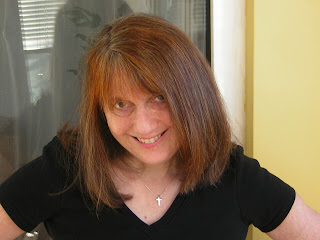 Kate Ellis was born and brought up in Liverpool and she studied drama in . She worked in teaching, marketing and accountancy before first enjoying writing success as a winner of the North West Playwrights competition. Crime and mystery stories have always fascinated her, as have medieval history and archaeology which she likes to incorporate in her books. She is married with two grown up sons and she lives in , with her husband and Vivaldi the cat.
Kate's novels feature archaeology graduate Detective Sergeant Wesley Peterson who fights crime in the "mean streets" (or should it be "mean lanes"?) of .  Each story combines an intriguing contemporary murder mystery with a parallel historical case. She has also written three books in the spooky Joe Plantagenet series set up in as well as many  crime fiction anthologies and magazines. She is a member of the Crime Writers Association and she is currently working on her sixteenth Wesley Peterson novel.