‘Herring on the Nile’ by L C Tyler 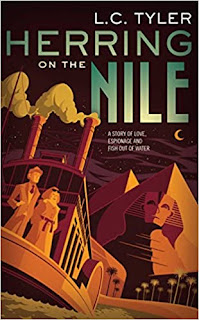 Published by MacMillan,
5 July 2011.
ISBN: 978-0-230-71469-4
Embarking on a research trip for his new book to be set in , writer Ethelred Tressider sets sail up the on the luxury paddle steamer Khedive. His intended companion for the trip was the attractive widow of the late Lord Muntham, but things rarely go according to plan, and so accompanying him is his agent Elsie Thirkettle.
Joining the ship the first passenger Ethelred sets eyes on is inept Private Eye Herbie Proctor, who imparts that he is there to protect his client, but doesn’t say who his client is.  Conversation with a Mr Pirbright takes an odd turn when it appears he thinks that Ethelred is the Ex-MI5 spy turned author Paul Fielder.  The two Egyptians tell Elsie they are undercover detectives chasing two criminals, but they won’t say who they are, but to keep it to herself.  After overhearing a couple of disjointed conversations, Ethelred and Elsie think all the other passengers also seem a pretty shady bunch.
When the boat’s engines fail, and a body is discovered, there is of course no end of suspects.   And Ethelred is in the thick of it.
A wonderful tribute to Agatha Christie, and at the risk of being hunted and tortured by Agatha Christie fans far more fun than ‘Death on the ’.
If you haven’t read any L C Tyler books before you are in for treat. The whole book is a joy – an intriguing mystery with some great characters. And the last paragraph is an utter delight.
-----
Reviewer: Lizzie Hayes 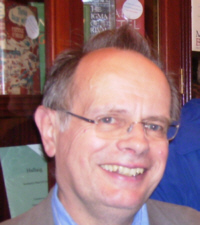 L. C. Tyler was born in Southend, Essex, and educated at Southend High School for Boys, Jesus College Oxford and City University London. After university he joined the Civil Service and worked at the Department of the Environment in London and Hong Kong. He then moved to the British Council, where his postings included Malaysia, Thailand, Sudan and Denmark. Since returning to the UK he has lived in Sussex and London. He was Chief Executive of the Royal College of Paediatrics and Child Health for eleven years. He is now a full-time writer. His first novel, The Herring Seller's Apprentice, was published by Macmillan in 2007, followed by A Very Persistent Illusion, Ten Little Herrings, The Herring in the Library, Herring on the Nile, Crooked Herring, Cat among the Herrings and Herring in the Smoke. The Maltese Herring.  The first book in a new historical series, A Cruel Necessity, was published by Constable and Robinson in November 2014. Since then, he has published six further books in this series. The latest being Death of a Ship Builder.