‘The Secret of Cold Hill’ by Peter James 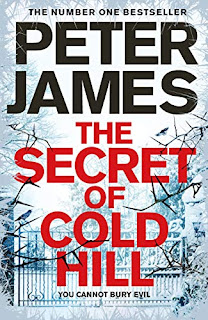 This is the second in the series of novels by this author, set in the Sussex village of Cold Hill. It is a horror novel in the tradition of Stephen King (but set in the English countryside as opposed to American suburbia) rather than a traditional crime novel, and supernatural elements predominate throughout.

The original eighteenth century mansion, Cold Hill House which featured in the earlier title The House on Cold Hill, has been destroyed by fire and its remains razed to the ground. In its place will be a brand-new estate of modern houses, planned to provide all the people of today require from their homes. So far only two houses have been built and it is one of those that the thoroughly modern young couple, Jason and Emily Danes, plan to be their ‘forever home’. Jason is an artist, specialising in portraits of clients’ pets, particularly dogs whose more lovable aspects he emphasises; he is on the verge of considerable commercial success. Emily runs a commercial catering business which is also highly successful and forms the bedrock of her husband’s more creative ventures. Their house has every modern convenience and then some, as the highly persuasive estate agent who had offered them every inducement to buy the house had enthusiastically pointed out. Central to the house’s ultra-efficient functioning is a command box which enables voice control of all the electronic functions which contribute to the requirements of modern living.

But Jason and Emily are not the first couple to move into one of the Cold Hill Park houses. Preceding them by a couple of months is another couple, Maurice and Claudette Penze-Weedell, and they are quite different to Jason and Emily. They are elderly and highly conventional in a rather old-fashioned, not to say, stereotypical, way, reminiscent of the couple in the 1990s sitcom, Keeping Up Appearance in  which Patricia Routledge played the lower-middle class Hyacinth Bucket (pronounced ‘bouquet’) with social aspirations and Clive Swift her henpecked husband. Claudette also has social aspirations; although she does not have quite Hyacinth’s ability with one-liner putdowns, the couple do provide a certain amount of comic relief. Jason and Emily mock the Penze-Weedells behind their backs who in their turn, while they court the young and rather more glamorous couple, also disapprove of them.

But, right from the beginning, it is apparent that things are going wrong. There are heavy footsteps in the loft of the Danes’s house, which Jason uses as a studio, but no-one is there; appliances supposedly controlled by the command box switch themselves on and off seemingly at whim, people appear who are already dead or who never existed. And while construction of the rest of the estate continues at full tilt a man dies in an accident, apparently beheaded by a digger. And an evil old man, Albert Fears, whom we first meet in the village pub, is never far from the scene. ‘You’ll never leave,’ he warns Jason and Emily. ‘No-one ever has.’ Is he perhaps the modern-day equivalent of the mediaeval image of a skeleton with a scythe, Death?
------
Reviewer: Radmila May

Peter James was educated at Charterhouse and then at film school. He lived in North America for a number of years, working as a screen writer and film producer, before returning to England. His multiple award-winning, Sunday Times Top Ten bestselling novels have been translated into thirty-three languages. His writings reflect his deep interest in medicine, science and the world of the police. He has produced numerous films, including The Merchant of Venice, starring Al Pacino, Jeremy Irons and Joseph Fiennes. He also co-created the hit Channel 4 series Bedsitcom, which was nominated for a Rose d'Or. Peter James won the Krimi-Blitz 2005 Crime Writer of the Year Award in Germany, and Dead Simple won both the 2006 Prix Polar International award and the 2007 Prix Cœur Noir award in France. He divides his time between his homes in Notting Hill in London and Sussex.