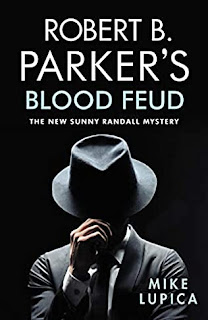 Robert B Parker stormed into my life back in 1986, when Spenser Private Eye arrived on our TV screens. The detective, played by the brilliant Robert Urich was a hit and cemented Parker’s reputation as one of the greats of the PI genre.

He died in 2010 and left substantial boots to fill. But his characters live on in books and TV movies, in the safe and sure hands of Ace Watkins, Michael Brandman, Reed Farrel Coleman; and now – helming the first Sunny Randall novel since 2007 – best-selling writer and long-time friend of Parker, Mike Lupica.

Parker wrote old time, stripped to the bone, diamond hard stories; in sentences laced with wit and intelligence. It is no easy task for any writer, however skilful, to take the reins from the hands of a master. But in Blood Fued, Mike Lupica knows what he is doing.

Sunny Randall is a Boston PI and former cop. A college graduate, a painter, a divorcee, and the owner of a miniature bull terror called Rosie. Richie Burke is the ex-husband she never stopped loving; although for a while, a couple of years ago, she and Jesse Stone were a pretty solid item.

The problem for everybody – including Richie, Sunny, her close friend Spike, the Boston cops, indeed Jesse Stone and Spenser back in the day – is that the Burke family is Irish Mafia. And now, the family has been targeted. Richie’s uncle Peter is shot in the back of his head; his father Desmond and his brother Felix brace for what is coming. But the unexpected hit is the attempted killing of Richie himself. Which brings Sunny into the business.

In hospital, Richie tries to talk her out of getting involved in a mob war. She ignores his pleadings and begins digging in all sorts of corners – hooking up with Spike, his contacts among the great and not so good, and cops she knows well. In the process she is dragged into the miasma of the Burke family business. And into the hands of assailants she has to be super skilled to deal with. In one rueful moment concluding – It turned into my version of ‘Take a Crime Boss to Work Day’.

Her relationship with Spike, black and gay, keeps her grounded. And the wit they share, keeps them together.
I said to Spike, “Do I look as if I’m getting older?”
“This is some kind of trap,” he said
"I’m being serious. The UPS kid ma’am’d me the other day.”
“I assume you shot him.”
“No,” I said. “But I thought about it.”

After Spike is gunned down and begins to recover in hospital, with Sunny at his bedside, a doctor tells him he is going to get a sling…
“What colour?” Spike asked.
“Excuse me?”
“I just want something which clashes with the fewest of my outfits,”
"The doctor frowned, said, “I think we go with basic blue here."

Any more story references are likely to give away too much. Suffice it to say, that Blood Feud is about guilt and grudges and secrets and hurt. Secrets so deep they must eventually be recognised and told. Hurt so strong the only outcome can be a thirst for vengeance. And debts, which Sunny Randall knows, in the end, she will have to pay.

Read and enjoy. And look forward to a return of Sunny at the hands of Mike Lupica.
------
Reviewer: Jeff Dowson 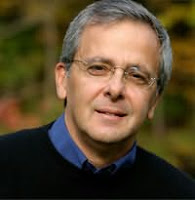 Mike Lupica is one of the most prominent sports writers in America. His longevity at the top of his field is based on his experience and insider's knowledge, coupled with a provocative presentation that takes an uncompromising look at the tumultuous world of professional sports. Today he is a syndicated columnist for the New York Daily News, which includes his popular "Shooting from the Lip" column, which appears every Sunday.

Jeff Dowson began his career working in the theatre as an actor and a director specialising in productions of contemporary British and European playwrights. From there he moved into television, and after early Channel 4 commissions he became an independent writer/producer/director.  Screen credits include arts series, entertainment features, drama documentaries, drama series and TV films. Turning crime novelist in 2014, he introduced Bristol private eye Jack Shepherd in Closing the Distance.  The series developed with Changing the Odds, Cloning the Hate and Bending the Rules. The Ed Grover series, set in Bristol in the years following World War 2, opened in spring 2018 with One Fight At A Time. The second thriller New Friends, Old Enemies will be published July 2020. Born in northeast England Jeff now lives in Bristol.  He is a member of BAFTA and the Crime Writers Association.
Visit  www.jeffdowson.co.uk
Posted by Lizzie at 18:15