‘The Last Wife’ by Karen Hamilton 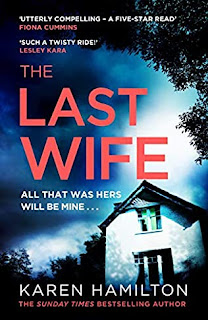 Marie and Nina have been best friends since their earliest school days. Marie, who is insecure and needy, idolizes Nina and wants to be as much like her as possible and resents any other friends that Nina might make. They both go to art college, Nina to study art, Marie to study photography. Nina marries young; her husband Stuart is well-off, rather older than her and not very exciting, and hey live in a large five-bedroomed house and have two lovely children, Emma and Felix. Marie also marries, someone she met on the internet; Ben is a firefighter and they live in a rented semi. Marie is a successful photographer but what she really wants is to, like Nina, have children and this she cannot achieve, however hard she and Ben try and that causes great strain upon their relationship. Marie also resents the fact that, as a mother of small children, Nina belongs to various mother-and-toddler groups and has made friendships apart from her relationship with Marie. But then there is a devastating development: Nina is diagnosed with an incurable cancer. After her death, Marie takes it upon herself to give maximum support to Stuart and the children, and when Ben informs her that he is leaving her for another woman who is expecting his child, Stuart suggests that Marie move in with him to look after the children and provide him with much-needed companionship. Not unnaturally this causes a great deal of gossip in the village and some alarm to Nina’s mother Deborah; although at the outset the relationship between Marie and Stuart is not sexual the inevitable does happen and it does seem that Marie is on the way to achieving what she has always wanted, to be as much like Nina as she can be. But then there are  some unwelcome developements: in the book group that Nina had started, and which Maria is now organising with meetings held in Stuart's house, Camilla arrives, someone whom both she and Nina had known in the past when they were at art college, and with whom they had reconnected on a holiday in Ibiza which ended in tragedy. Then the malicious messages start to appear.

Marie is a profoundly disturbed person, manipulative in a way she cannot admit to herself but which others, like Deborah, recognise all too well. Even the various psychotherapists whom Marie consults cannot get her to admit this. She is not at all an attractive person and her self-centredness is effectively portrayed by the author in a way which is particularly claustrophobic. This novel is very firmly within the psychological suspense genre, now one of the most successful strands of crime and mystery fiction.
------
Reviewer: Radmila May

Karen Hamilton spent her childhood in Angola, Zimbabwe, Belgium and Italy and worked as a flight attendant for many years. Karen is a recent graduate of the Faber Academy, and having now put down roots in Hampshire to raise her young family with her husband, she satisfies her wanderlust by exploring the world through her writing.

Radmila May was born in the U.S. but has lived in the U.K. since she was seven apart from seven years in The Hague. She read law at university but did not go into practice. Instead she worked for many years for a firm of law publishers and still does occasional work for them including taking part in a substantial revision and updating of her late husband’s legal practitioners’ work on Criminal Evidence published late 2015. She has also contributed short stories with a distinctly criminal flavour to two of the Oxford Stories anthologies published by Oxpens Press – a third story is to be published shortly in another Oxford Stories anthology – and is now concentrating on her own writing.
Posted by Lizzie at 15:02