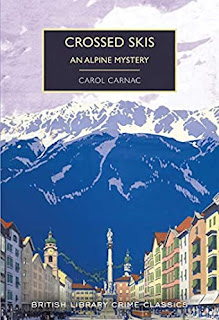 The story opens in London in 1951, on a foggy, snowy New Year’s Day. A group of young people are looking forward to leaving dismal weather and post-war rationing to go on a skiing trip in the Austrian Alps. The trip is organised by Bridget Manners and several of the sixteen travellers know each other well, but others have been introduced in a far more casual way, and two of the young men, Robert O’Hara and Nigel Helston, are last minute substitutes and strangers to all the rest of the skiing party.

The reader follows the young people as they travel by train and ferry to their longed-for holiday. Then the action switches to a less exclusive part of London where an honest, working class landlady is having a distressing start to the year. Mrs Stein returns from an overnight visit to her sister and is greeted with the news that the upper floor of her house has been gutted by fire. Worse is to come: Mrs Stein had believed the house was empty, all of the lodgers having gone home for the holiday, but in one of the lodgers’ bedrooms there is a dead body, face and hands burned beyond identification. The young man who rented that room called himself Mr Gray and, at first, it is assumed that he was drunk and collapsed onto the gas fire. However, the police officer that attended the fire felt suspicious and wondered if there had been more than one person in the room. The official suspicions grow when, in the snow in the doorway of the house, a police officer sees a circular mark and recognises it as having been made by the end of a ski having been rested there.

Some clever detection, based on fingerprints, leads Detective Chief Inspector Rivers to suspect that what had occurred was connected with a daring robbery by a man with superb climbing skill, and as the robber escaped he murdered a witness. Further evidence causes Rivers and his assistant, Detective Sergeant Lancing, to follow the skiing party to Lech am Arlberg. In the meantime, in Lech, some strange games with currency makes Kate Reid, the oldest of Bridget’s party, feel suspicious of some of her fellow travellers. The two strands of the story converge as Rivers and Lancing arrive at Lech and the investigation culminates in a dangerous chase in the midst of a mountain blizzard.

Carol Carnac is one of the pseudonyms used by Edith Caroline Rivett, who is best known by her other pseudonym, E.C.R.Lorac. She based the skiing lore on a trip that she had taken with a similar party (to whom she dedicated the book) and it is generally accepted that the character of Kate was based on the author herself. I must admit that I found the start of the book rather confusing, because the large number of characters who make up the skiing party are all mentioned in a few pages, however it is well worth persevering, because Crossed Skis soon picks up pace and turns into a fascinating detective novel, with the two locations and strands of the story skilfully described and intertwined. The plot is clever, the descriptions of the Austrian Alps are evocative, and the characters are engaging, especially the police team of Rivers and Lancing.

Crossed Skis was first published in 1952 and has been recently republished by the British Library, with an interesting foreword by Martin Edwards. It is an excellent depiction of society just after the Second World War and a fascinating and unusual detective story. A very enjoyable read.
------
Reviewer: Carol Westron

Carol Carnac is a pseudonym for E.C.R. Lorac the pen name of Edith Caroline Rivett (1894-1958) who was a prolific writer of crime fiction from the 1930s to the 1950s, and a member of the prestigious Detection Club. She lived her last years with her elder sister, Gladys Rivett (1891-1966), in Lonsdale, Lancashire. Edith Rivett died at the Caton Green Nursing Home, Caton-with-Littledale, near Lancaster. Her books have been almost entirely neglected since her death but deserve rediscovery as fine examples of classic British crime fiction in its golden age.