‘The Useful Idiot’ by John Sweeney 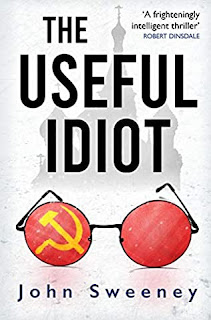 ‘Useful idiot’ is a political term applied to describe a person who naively believes what he or she is told and may even be prepared to act on it. In particular the term was attributed by Lenin and Stalin to scornfully describe such people; whether or not either leader actually used the term they certainly used the concept.

This novel is based on the life of a young Welsh journalist Gareth Jones. As a youth he had been radicalised by witnessing savage beatings administered by the police to striking miners in the South Wales valleys and this had led him to sympathy for communism. He had degrees in French, German and Russian and, having worked as a private secretary for Lloyd George, became a reporter for the Western Mail in Cardiff.

Like many people in Europe and the USA, Jones is initially sympathetic to the Soviet ambitions to rebuild the Soviet Union into a truly socialist state under the leadership of, first, Lenin and then Stalin. Public figures such as George Bernard Shaw had praised the enterprise and discounted reports of famine resulting from the enforced collectivisation of agriculture in the Ukraine and elsewhere. He travels to Moscow in 1932 to see the situation for himself and to report on it. He gets to know various other reporters particularly the charming, cynical Walter Duranty and is told that the Soviet Union is desperate to gain diplomatic recognition from the U.S. particularly in view of Hitler’s rise to power. The authorities entertain these foreign correspondents lavishly but at the same time expect those correspondents to write reports which are not only deeply sycophantic but completely untrue. And he observes for himself the horrific effects of the famine in which (as is now known) untold millions perished. At the same time they are all being openly watched by the secret police known as the Cheka or the OGPU. Jones meets a beautiful Russian/Ukrainian young woman called Evgenia Moronova; he is very much attracted to her but throughout the book there is a certain ambivalence about her and he is never quite sure whether she is for or against the regime. Jones acquires various items of evidence on film about the horrific effects of the famine; if he gets them to the right quarters the world will know the truth about the famine. He and Evgenia make desperate attempts to flee, finally reaching the Black Sea port of Odessa and seeking refuge in the city’s catacombs.

The story of Gareth Jones has now been filmed as Mr Jones with James Norton in the title role. It was due to be released in February of this year but presumably the current coronavirus pandemic has had the same effect as on everything else. I look forward to seeing it when it is released.
------
Reviewer: Radmila May

John Sweeney is an award-winning writer and broadcaster. As a reporter, first for the Observer and then for the BBC, Sweeney has covered wars and chaos in more than eighty countries and has been undercover to Chechnya, North Korea and Zimbabwe. He has also helped free seven people falsely convicted of killing their babies in landmark legal trials in the UK. Sweeney became a YouTube sensation in 2007 for losing his temper with a senior member of the Church of Scientology. His first novel, Elephant Moon, was published to much acclaim in 2012. His hobby is falling off his bike on the way back from the pub.

Radmila May was born in the U.S. but has lived in the U.K. since she was seven apart from seven years in The Hague. She read law at university but did not go into practice. Instead she worked for many years for a firm of law publishers and still does occasional work for them including taking part in a substantial revision and updating of her late husband’s legal practitioners’ work on Criminal Evidence published late 2015. She has also contributed short stories with a distinctly criminal flavour to two of the Oxford Stories anthologies published by Oxpens Press – a third story is to be published shortly in another Oxford Stories anthology – and is now concentrating on her own writing.
Posted by Lizzie at 13:03