‘The Golden Tresses of the Dead’ by Alan Bradley 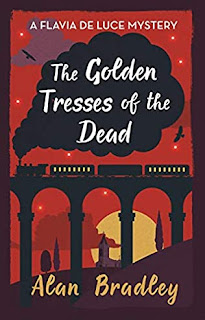 No-one can say that twelve-year old Flavia de Luce suffers from false modesty. In the first sentence, the tenth title in the eponymous series set in the early 1950s, she announces that she’s a girl with a better than average brain. And indeed, she is, with a formidable knowledge of chemistry including poisons. Particularly poisons. Now, having been consulted by the constabulary on many occasions, she has felt it necessary to take on a partner, and who could it be but (in the tradition of such Golden Age authors like Dorothy L. Sayers, Margery Allingham and P G Wodehouse) her late father’s valet, gardener and all-round sounding board, Arthur Dogger. They operate under the name of Arthur W Dogger and Associates and the pair converse with each other in dialogue that makes eminent historians of the past, such as Gibbon and Macaulay, seem colloquial and, for at least one reviewer, dangerously infectious.

There is a change coming in Flavia’s life: her older sister Feeley (Ophelia) is getting married in the local church with a grand reception afterwards, with a magnificent centre piece being provided by an enormous wedding cake. Nothing disturbs the wedding service, apart from Flavia’s malicious little cousin Undine practising her ventriloquist skills with werewolf howls. But at the dinner when the cake is cut into an unmistakeable human finger, is revealed. Unsurprisingly, Feeley is devastated by this but Flavia, as ever swift to act when required to, ensures that bride and groom depart on their honeymoon. She, meanwhile, having abstracted the finger, bears it away for examination by herself and Dogger in her laboratory in the ancestral home. They soon establish, by a combination of scientific knowledge, particularly chemical, and logical deduction equal at least to that of Sherlock Holmes, that the finger belonged to a Mme. Adriana Castelnuovo, an acclaimed classical guitarist. But before Flavia and Dogger can set off in pursuit of further evidence as to the finger their services are also required by a Mrs Prill. Some letters have been taken from her house, although without any sign of forced entry.

Of course, the two enquiries turn out to be interlinked. The next time Flavia and Dogger call on Mrs Prill she is dead – poisoned. Can Mrs Prill’s father, in a home and suffering from Alzheimer’s, cast any light on what has been going on? Is he as mentally disabled as he seems? Is there a connection between his highly profitable business of manufacturing homeopathic medicines and the arrival in the village of the Missionary Misses Pursebrook and Stonemaker under the auspices of Miss Cara Truelove so heavily involved in the affais of the local church? When Undine disappears for 24 hours and re-emerges with a dead rat, can Flavia and Dogger’s dissection of the rat provide any more information? All this helps to distract Flavia from how much, to her surprise considering their apparently viperish relationship, she misses her oldest sister. And it gives her plenty of time to linger in churchyards contemplating the process of decay, something she really enjoys.

All in all, this is a thoroughly entertaining read.
------
Reviewer: Radmila May

Alan Bradley was born in 1938 in Toronto, Canads. Alongside his two older sisters, Bradley was raised roughly 100 kilometres east of Toronto in the small town of Colbourg, Ontario. His mother brought up the children alone after Bradley's father left the family when Bradley was a toddler. Bradley learned to read at an early age, partly because he was a sickly child who spent a lot of time in bed. However, Bradley confesses to having been a "very bad student", particularly in high school, spending his free time reading in the local cemetery because he felt he didn't fit in. After completing his education, Bradley worked in Cobourg as a radio and television engineer, designing and building electronic systems. He then worked briefly for Ryerson Polytechnical Institute in Toronto (now Ryerson, University), before moving to Saskatoon to take a job at the University of Saskatchewan in 1969. There he helped develop a broadcasting studio, where he worked as Director of Television Engineering for 25 years. He took an early retirement from the university in 1994 in order to become a full-time writer.