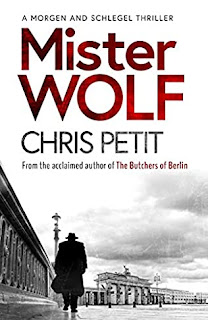 Mister Wolf was one of the names that Adolf Hitler liked to call himself, an indication of the murderous adolescent fantasies that led to the most appalling tragedies of the last or any century. Not for nothing was his eastern headquarters known as The Wolf’s Lair, and it is with the failed assassination attempt on his life in July 1944 in the Wolf’s Lair that this thriller, the third in the series involving reluctant Gestapo officer August Schlegel and investigative prosecutor Eiko Morgen, begins. The atmosphere throughout Germany is unbelievably paranoid with thousands of arrests, mostly of people totally unconnected to that or any other plot, and rumours abound that Hitler has been killed and his place taken by a look-alike. Although August is called upon to make a number of arrests, he is more concerned about firstly, a list of names with which he is supplied anonymously which includes Huber, A. He believes that that is the name of his father, Anton Schlegel; August had been told that Anton had gone to South America and there had drowned in a river; secondly, a Berlin clinic which has been destroyed in a fire. A number of bodies are in the cellar, shot in the head, and there are reports of a man falling from the roof. And one of the cleaning staff tells August that she thought she had seen the Fuehrer in the clinic.

Eventually, August’s enquiries into these two events lead him back into the past beyond the Night of the Long Knives in 1934 when Hitler ordered the elimination of all members of the SA (a rival to the SS) including their leader Eric Rohm, to the time when Hitler was climbing to power. That was when his infatuation with his step-niece Geli Raubal was at its height. He had installed her in his apartment in Munich and controlled every aspect of her life. No-one can be sure of the nature of that relationship, particularly the sexual aspect, but he undoubtedly exercised what today would be called ‘coercive control’ (in the UK since 2016 a criminal offence) and all sorts of rumours circulated about the various rather disgusting (not to say peculiar) sexual demands that he made on her. She certainly made some non-specific complaints about him, and their relationship was undoubtedly stormy, hardly surprising from a lively young woman kept under what was no better than house arrest. It is the manner of her death in 1931 that has been the subject of speculation; she was found in the apartment shot in the head. Hitler himself was completely devastated by her death; but she did really commit suicide? Or did Hitler, infuriated by her expressed intention to leave him, do it or order someone else to? He himself, although intoxicated by the idea of bloodshed, preferred to leave the actual shedding of blood to others but there were plenty of people around him who would have done it, with or without express orders. Or were there people who thought she was just a liability to be got rid of anyhow? To all these possibilities the author adds another, as convincing as any of those that swirled through the madhouse that Germany became in the next 14 years. Even today theories proliferate about Geli’s death although she was only one of Hitler’s millions of victims.

The series is, it appears, to be screened for TV.  There are an enormous number of characters, nearly all real-life, and the action goes backwards and forwards in time and between locations. I am sure a TV production will undoubtedly prove highly popular.
-------
Reviewer: Radmila May

Chris Petit is an internationally renowned author and filmmaker once described by Le Mondeas the Robespierre of English cinema. His films include the now definitive Radio On (1979) and have been the subject of several foreign retrospectives. He has written a trio of acclaimed "beyond black" political thrillers covering a serial killer operating in sectarian Northern Ireland (The Psalm Killer), dirty money in world war 2 (The Human Pool) and terror, arms trading and the bombing of a civilian aircraft (The Passenger). He lives in London.

Radmila May was born in the U.S. but has lived in the U.K. since she was seven apart from seven years in The Hague. She read law at university but did not go into practice. Instead she worked for many years for a firm of law publishers and still does occasional work for them including taking part in a substantial revision and updating of her late husband’s legal practitioners’ work on Criminal Evidence published late 2015. She has also contributed short stories with a distinctly criminal flavour to two of the Oxford Stories anthologies published by Oxpens Press – a third story is to be published shortly in another Oxford Stories anthology – and is now concentrating on her own writing.
Posted by Lizzie at 11:10