‘The Last Crossing’ by Brian McGilloway 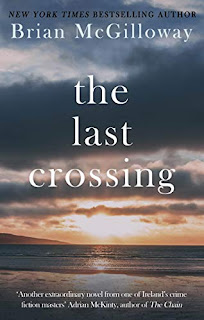 Thirty years ago, in a wood about an hour’s drive north of Glasgow, two men and a young woman dismount from a car. A third man is pulled from the boot of the car and half-walked, half-dragged by the others into the wood. One of the men is Tony Canning, a schoolteacher and the protagonist of this story, the other, slightly older, is Hugh Duggan. The woman is Karen Logue. The third man, stripped naked and badly beaten, is Martin Kelly, a drug dealer. For all that they are in Scotland, none of them are Scots; they are from Northern Ireland and their various stories epitomise the vicious sectarian conflict that has torn their communities apart. Duggan accuses Kelly of being a ‘tout’, an informer; distraught, Kelly denies this but to no avail. Duggan shoots him and he and Peter bury him in an already-dug grave, with stones above the body to deter scavengers, while Karen burns Kelly’s clothes. And there Kelly lies, undisturbed, unknown for 30 years.

After that, we go back in time and learn how Peter Canning from Derry was not involved in the sectarian politics of Northern Ireland, until his brother Danny is accidentally run over by a British soldier in a Landrover and killed. At Danny’s funeral a sectarian politician, Sean Mullan, speaks to Peter and his father. ‘Someone will pay,’ he says. Later that night a policeman is shot dead, A few days later soldiers force their way into Peter’s home and arrest both him and his father. They are separated but in the same cell as Peter is someone he had never met before: Hugh Duggan who clearly is not new to this particular experience. The next morning Peter and his father are released, but not Duggan. Peter’s father, anxious that his son not be drawn into the conflict, sends him to relations in Scotland. A few months later Peter is invited to a party. And there is Duggan prepared to be affable. But Tony is more interested in a young woman at the party, Karen Logue. She seems to be interested in him, and Peter, thoroughly smitten, is fascinated by her so much so that when Duggan asks Tony to steal some mercury thermometers from the school where he is teaching, although wondering vaguely at the request, he does so. Duggan then persuades Peter to drive a particular car to take Karen on a drive to Paisley where he has booked a restaurant, have a meal there, and drive back afterwards and leave the car at a pre-arranged place. Peter is concerned that this could be connected with drug dealing since he has often encountered a drug dealer called Martin Kelly who has exploited some of the children whom he teaches, but Duggan reassures him that this is not so. On the way back, he and Karen begin to be anxious about what they are getting mixed up in but Duggan makes it clear that they are now irretrievably implicated with terrorist activities and not only are they at risk but so is Peter’s father. Their next task is to assist in the kidnap and murder of Martin Kelly, not for drug dealing but for being an informer.

That kidnap and murder is the event recounted in the first chapter and I must say I found it extremely harrowing. Kelly’s fear, his pleas for his life, his insistence that he was not an informer are so powerfully written as to be unforgettable. In the following chapters we learn first of all how it was that Peter allowed himself to be drawn into the conspiracy to murder in the first place. We learn too of the family tragedy that had drawn Karen into the conspiracy and made her also a tool of the stronger-willed Hugh Duggan. Peter and Karen return to Northern Ireland.

Now, thirty years later with the peace process having established calm of a sort in Northern Ireland, the relatives of the disappeared are calling for their bodies to be found and given a decent burial. One of those bodies is that of Martin Kelly and someone – Sean Mullan, now a leading politician in Northern Ireland – has required that Peter, Karen and Duggan go back to Scotland and identify the grave of Martin Kelly. Peter and Karen are motivated by remorse at what they did and believe that this would go some way to some sort of atonement. Duggan, however, has come to believe that Kelly, who had through his drug dealing activities obtained information useful to the terrorists and whom Duggan had counted as a friend, was not an informer. Someone else had passed information to someone who was a target for the terrorists and had then set up Kelly to divert suspicion. Now Duggan is determined to find out who that someone else was and to make them pay. He considers that he and his cause have been betrayed by the peacemakers; they have profited while he has gained nothing.

The structure of the story is divided between chapters alternately describing the events leading up to Kelly’s death and those describing this last trip to Scotland. Each chapter begins by picking up a phrase at the end of the previous chapter, thus illustrating how the present is irretrievably linked to the past.

I found this book highly gripping but at the same time, in its account of how basically good people can be drawn into doing something evil, deeply sad. Recommended.
------
Reviewer: Radmila May

Brian McGilloway was born in Derry, Northern Ireland in 1974. After studying English at Queen’s University, Belfast, he took up a teaching position in St Columb’s College in Derry, where he is currently Head of English.  His first novel, Borderlands, published by Macmillan New Writing, was shortlisted for the CWA New Blood Dagger 2007 and was hailed by The Times as ‘one of (2007’s) most impressive debuts.’ Brian lives near the Irish borderlands with his wife, daughter and three sons.
http://www.brianmcgilloway.com/