‘Grace is Gone’ by Emily Elgar 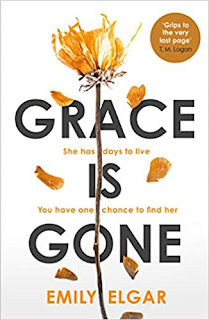 Grace is a teenager suffering from multiple, sometimes inexplicable diseases. Her sole carer is Meg, her devoted mother, who fights with every fibre for her daughter to get the treatment she deserves. The whole town of Ashford, Cornwall, is devoted to making life better for the little family, which has already suffered the death of a beloved son by drowning; his father, who was in charge of him at the time, is still mentally unstable after a severe breakdown. Closest both literally and figuratively to the women are their neighbours Cara, the nearest thing Grace has to a friend, and her mother.

One morning Cara pops round to see her friend to find her wheelchair tipped on to the floor and empty. There is no sign of her. The home is silent. Meg, with a hole in her head where her face should be, is dead.

There’s a police investigation, of course, but that isn’t what Elgar follows. She uses two contrasting viewpoint characters to uncover the truth: Cara, clearly a lot brighter than she thinks she is, and Jon, whose professional and personal life are in tatters after an ill-judged article for the local paper. Interspersed are extracts from the missing girl’s diary.

The second novel is always supposed to be the hardest to write, but Elgar has triumphed, apart from one thing which niggled throughout: she makes no attempt to make the names sound Cornish, and Ashford is too well known to be used as a double. On very much the plus side, she handles all the changes of tone with aplomb, and sets up an exceptionally tense situation. I’m not going to spoil it by revealing the denouement, except to say it’s as ambivalent as anyone could wish. I’ve had my say: go and read Elgar’s own words and enjoy every moment of a very good book.
Highly recommended.
------
Reviewer Judith Cutler

Emily Elgar was originally from the Cotswolds. She studied at Edinburgh University and then spent a few happy years working as a travel writer in Southern Africa and as Events Coordinator for an international NGO in New York and Istanbul. She has now returned to London where she lives and works as a support worker for a national charity supporting vulnerable women.

Judith Cutler was born in the Black Country, just outside Birmingham, later moving to the Birmingham suburb of Harborne. Judith started writing while she was at the then Oldbury Grammar School, winning the Critical Quarterly Short Story prize with the second story she wrote. She subsequently read English at university. It was an attack of chickenpox caught from her son that kick-started her writing career. One way of dealing with the itch was to hold a pencil in one hand, a block of paper in the other - and so she wrote her first novel. This eventually appeared in a much revised version as Coming Alive, published by Severn House. Judith has seven series. The first two featured amateur sleuth Sophie Rivers (10 books) and Detective Sergeant Kate Power (6 Books). Then came Josie Wells, a middle-aged woman with a quick tongue, and a love of good food, there are two books, The Food Detective and The Chinese Takeout. The Lina Townsend books are set in the world of antiques and there are five books in this series. There are two books featuring Tobias Campion set in the Regency period, and her series featuring Chief Superintendent Fran Harman (6 books), and Jodie Welsh, Rector’s wife and amateur sleuth. Her most recent series features a head teacher. The first book is Head Start. Judith has also written two standalone’s Scar Tissue and Staging Death.
http://www.judithcutler.com.
Posted by Lizzie at 16:16