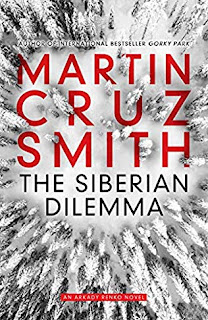 What is the Siberian dilemma? An example: A fisherman is moving around on a frozen lake, listening all the while for sounds that the ice is cracking so he can take evasive action. But the ice does crack, and the fisherman falls into the freezing water. If he gets out, he will almost certainly die of cold in a few seconds; if he stays in the water he might have a minute or so more. What to do?

It is to Siberia that Special Investigator Arkady Renko, the protagonist of this ninth novel in this author’s Russian series, is told by his boss Prosecutor Zurin to go to Irkutsk in Siberia to pick up a Chechen youth called Aba Makhmud who allegedly attempted to murder Zurin, take him into custody, and ensure he is convicted and gets a good long sentence – pretty standard criminal procedural practice in Putin’s Russia! Another factor is that Tatiana Petrovna, a journalist and Renko’s lover, had gone to Irkutsk to interview for the weekly political publication Russia Now.

Mikhail Kuznetsov, an idealistic oligarch who is considering running for president against Putin. There also seems to be a connection between Tatiana and a rich property developer with gangland connections called Boris Benz. Renko has been expecting her back by now but she has not returned. During the flight to Irkutsk he makes the acquaintance of a native Mongolian, Rinchin Bolat, who insists that he would be ideal as Renko’s factotum. Once in Irkutsk Renko discovers that the story of Aba Makhmud is not what he was told it was and the charge against him is modified to take account. But for Renko finding Tatiana is more important and when he does find her he is surprised to find that Kuznetsov is really likeable and even has a good word to say for Boris Benz. Benz arranges that Renko and Bolat should go with him by helicopter to Lake Baikal to hunt bears and Tatiana insists on going with him. A bear is indeed shot and killed, but then Renko, Tatiana and Bolat find that they are alone in the frozen Siberian forest with no way of getting out – they are faced with the Siberian dilemma and have to make a choice.

This book, almost a novella rather than a full-length narrative, is rather short even though it is bumped out with maps and illustrations, blank pages at the end of chapters, and extra spaces between lines in the text. It does, however, present a fascinating picture of life in Russia today and a compelling depiction of icy cold, snowbound Siberia. And there is an enjoyable episode in which Bolat and Renko take part in a shamanistic ritual; although Bolat insists that shamanism is genuine and effective, Renko is totally sceptical about shamanism.
------
Reviewer: Radmila May

Martin Cruz-Smith was born in 1942 in Reading, Pennsylvania. His novels include, Tatiana, Gorky Park, Stalin's Ghost, Wolves Eat Dogs, Polar Star and Stallion Gate. A two-time winner of the Hammett Prize from the International Association of Crime Writers and a recipient of Britain's Golden Dagger Award, he lives in California.