‘Someone Is Lying’ by Jenny Blackhurst 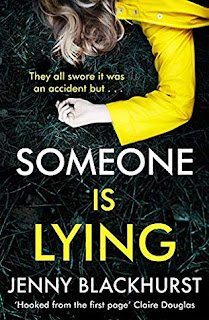 Everyone has secrets, even (or perhaps especially) people whose lives are to all intents and purposes perfect. To outsiders, life in Severn Oaks appears as perfect as it comes: a dozen or so houses forming a safe, well-to-do community where everyone gets along. But a few months ago, someone died an unnatural death during a party at Severn Oaks. The verdict at the inquest declared it a tragic accident, and no one questioned it. Until the Facebook post. And the podcasts.

Someone Is Lying is the story of how a community can come unravelled when someone dares to suggest things are not as perfect as they seem. Secrets and skeletons come tumbling into the spotlight; real feelings, less palatable than the ones people admit to, are revealed and expressed; friendships are strained to breaking point. And then someone disappears.

Jenny Blackhurst digs down under the surface of this apparently idyllic community and peoples it with characters who are flawed, vulnerable, and above all, not at all what they would like to appear. There's Miranda, super-organized, on top of everything, happily married, the natural successor as community leader to Erica, the woman who tragically fell out of a tree house at a party. Or is she? And Felicity, single mother of twins, successful businesswoman: why does she sneak out late at night, avoiding  the CCTV cameras? And as for Karla and Marcus, the golden couple who live out their blissful family life in the media spotlight: has anyone asked their sons how they feel about it all?

And what do any of them know about how Erica really died? Or why Mary Beth, her best friend, has gone missing, and so has the young barista from the coffee shop?

There's a little of everything in this well-crafted psychological thriller: characters you feel you know, a carefully evoked ambience, lots of tension; there's even a policeman struggling with his conscience, and another one determined to be that conscience. As the title says, someone is lying; and as the mystery of how – and why – Erica really died unfolds, you won't want to stop reading until you find out who that someone is.
------
Reviewer: Lynne Patrick

Jenny Blackhurst grew up in Shropshire where she still lives with her husband and children. Growing up she spent hours reading and talking about crime novels – writing her own seemed like natural progression. Inspired by the emotions she felt around her own son’s birth, How I Lost You was Jenny’s thrilling debut crime novel. Lynne Patrick has been a writer ever since she could pick up a pen, and has enjoyed success with short stories, reviews and feature journalism, but never, alas, with a novel. She crossed to the dark side to become a publisher for a few years, and is proud to have launched several careers which are now burgeoning. She lives on the edge of rural Derbyshire in a house groaning with books, about half of them crime fiction.
Posted by Lizzie at 14:55