‘Takes One to Know One’ by Susan Isaacs 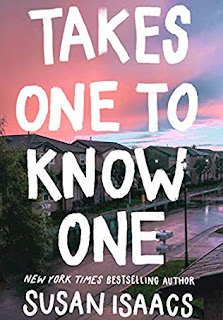 Corie Geller, is married to Josh, formerly a lawyer in a top Manhattan law firm, who following the sudden death of his wife Dawn traded in his partnership for a federal judgeship so that he would be around more for his daughter Eliza. So Corie now lives in a large house with a handsome husband who she loves, and their daughter. Corie legally adopted Eliza a short time after the marriage, and she and Eliza get on famously.  Oh! and did I not mention Josh is wealthy.

All in the garden should be lovely, and is, but, there is always a ‘but’ Corie prior to her marriage was an FBI agent, part of the Joint Terrorism Task Force  - hunting terrorists, and now at only 35 she is a suburban housewife, who speaking Arabic is making use of her knowledge by scouting Arabic fiction for a few literary agencies.  Unable to mention her former employment she is slow to make friends.  However, she has joined a group of six people who work from home following the loss of their regular jobs as a result of the Great Recession.  Every Wednesday the Shorehaven group meet for lunch and taken in rotation each week one of the seven would speak about his or her business life and how things were going.

For Corie the association has not proved that beneficial. The idea is to encourage and support each other. But she isfact numb with boredom with the whole thing. Phoebe Melowicz is an ebay seller, with an ear-splitting voice, and a habit of standing uncomfortably close to one. Iris Kubel who owns Moveable Gardens, Marcalynn now a speech writer for Long Island Republicans, John the landscape drainage guy, Lucy Winters with her pie charts, and Pete Delaney, a package designer.  It is the latter that spikes Cories interest although he acts like part of the group, Corie feels that there is something off about him. He is always first to arrive and ensures that he sits in the same spot (often with a different phone in hand) and he keeps one eye glued to his car. Corie feels that Pete is hiding something – but what.

Written in the first person by Corie the story follows her journey to find out what it is about Peter that is wrong. Initially she keeps her suspicions to herself but eventually shares them with her father Dan Schottland, a retired NYD detective.  Dan is sceptical and suggests that her boredom may be a contributing factor in her suspicions about Pete, As, her father says he may be an introverted type of guy that keeps himself to himself – there are many people like that.  Admitting that her father could be right doesn’t stop Corie from checking Peter out. And so, begins Corie’s clandestine investigation.

I loved this book although it was in a way quite slow to start, I couldn’t put it down.  And I was fascinated by the painstaking way Corie gradually gathered information about Pete.  Is Pete who he proports to be or has he a secret life?

I see from the inside cover of the book that Susan Isaacs has written 15 books and yet this is the first I have read. The life of a book reviewer is twofold, on the positive side you get to read many books by authors that you may not have read before, but with the high number of books you receive you don’t seek out new books and can therefore easily miss the wonderful works of an author.  This is one of those times.   Highly recommended.
------
Reviewer: Lizzie Sirett

Susan Isaacs was born in Brooklyn and educated at Queens College. After leaving school, she joined the staff at Seventeen magazine.” That’s how I became a writer’.  She says. While married and raising two children Susan continued to do occasional magazine pieces and read mysteries.  And that’s how her first book Compromising Positions, a whodunit with a housewife-detective set on Long Island came about.  Susan has now written 14 books. She still lives on Long Island with her husband, a criminal defence lawyer, breakfast chef, and fellow political junkie.  Takes One To Know One published February 2020 is the first in a new series.
https://www.susanisaacs.com/