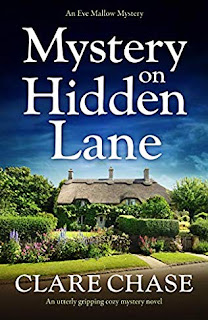 Eve Mallow arrives in the village of Saxford St Peter in Suffolk to write the obituary of the world-famous cellist Bernard Fitzpatrick , who had accidentally drowned in the River Sax. Arriving too early to collect the keys for the cottage she has rented for a couple of weeks in order to interview and learn more of the background of her subject, she and her dachshund, Gus take a stroll on the beach and while enjoying the sun sheltering in the sand dunes accidently overhear a conversation that has her beating a hasty retreat.

Her new home Elizabeth Cottage on Haunted Lane is a dream, and despite being very much a city girl Eve is looking forward to spending time in this quaint little village, as she sets about interviewing the living to learn the secrets of the dead. Her first shock is learning that Bernard was the victim of murder, And, it soon becomes apparent that her subject was not universally loved.

The hub of the village seems to be split between the village pub, The Cross Keys Inn and the village shop run by Moira an avid gossip. But it is in the local tea shop that Eve encounters the irrepressible Viv and finds a friend, and learns much about the village and its inhabitants. But whilst gathering background information is useful Eve prefers to draw her own conclusions by interviewing the people closest to her subject.  And so, she sets out to interview his staff at High House, Adam Cox, his secretary, Polly his new PR girl, and as she talks to those who were closest to him, she scents a mystery.

Rich in characters, and so entrancing is the picture Clare paints of the village and its inhabitants that the more I read the more  I wanted to get in my car and drive to Saxford St Peter, even though I knew it didn’t exist.

However, the more people Eve speaks to the clearer it becomes that many people had reason to hate Bernard Fitzpatrick. So does this charming village house a killer?  When a second person is killed Eve decides to turn detective.

An absolutely wonderful village murder.  I couldn’t put it down. I see that there is a second book in the series due out on the 12 March 2020. I can’t wait. This book is most highly recommended,
------
Reviewer: Lizzie Sirett

Clare Chase writes fast-paced romantic mysteries, using London and Cambridge as settings. Her influences include JD Robb, Janet Evanovich, Mary Stewart and Sue Grafton. Brought up in the Midlands, she went on to read English at London University, then worked in book and author promotion in venues as diverse as schools, pubs and prisons. More recently she’s exercised her creative writing muscles in the world of PR and worked for the University of Cambridge. Her current day job is at the Royal Society of Chemistry. Her writing is inspired by what makes people tick, and how strong emotions can occasionally turn everyday incidents into the stuff of crime novels. It would be impossible not to mix these topics with romance and relationships; they’re central to life and drive all forms of drama. When she’s not reading or writing, Clare enjoys drawing, cooking and trips to the Lake District. Closer to home she loves wandering round the pubs, restaurants and galleries of Cambridge where she lives with her husband and two teenage daughters.
www.clarechase.com
Posted by Lizzie at 15:54