‘The Clockmaker’ by Jane A Adams 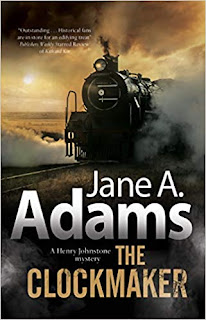 Joseph Levy, the son of Ben Levy and nephew of Abraham Levy is engaged to be married to Rebecca Goldman who he has known since childhood. The Goldman’s have moved to Lincoln and it had become a regular habit for Joseph to travel from London to stay with his fiancée.  On the 3rd February 1929, Rebecca’s family saw him board the London train at Lincoln station.  But he did not arrive.

Now on the 20th February 1929 with no news of Joseph, a worried Abraham seeks help from Detective Chief Inspector Henry Johnston whom he had encountered on an earlier investigation Henry had dealt with.  Abraham explains to Henry and Sergeant Mickey Hitchens that the local police have done very little, saying that as Joseph is an adult and learning further that Joseph had an altercation with his fiancée and that they parted on bad terms, that he has probably got cold feet about the marriage and gone off on his own for a while. But Abraham insists that Joseph would have made contact with someone in the family. He says ‘It does not help that we are Jews’. Henry explains that they are murder detectives and that this is not in their remit. However, with no contact Abraham is convinced that Joseph is dead.  With reluctance Henry agrees to look into the case.

Initially, their enquires of the local police show that they have done all they probably could, but as Henry probes deeper, things turn up unexpectedly that lead him to think that Joseph’s disappearance might be more complicated than he had first thought.

Jane paints a bleak picture of life for the poorer classes in 1929.  Although the gangs that control the East End of London seem to echo the situation we have today.  Sergeant Mickey Hitchens has grown up in the area. I liked Mickey very much. He is sensible and at times he saves a situation from going wrong.

On the other side of the coin we have Henry’s family. His sister Cynthia who is his friend and confident.  Cynthia has problems too, mainly that her husband Albert is a pushover for a ‘sure investment’.  This is 1929 and the financial world is rocky and unpredictable.

I found this a fascinating book.  Apart from the intriguing mystery, the background to the period is interesting being set at the time of economic unrest, and the situation in Germany. Also the anti-Semitism that existed is explained sensitively and with understanding. Recommended.
------
Reviewer: Lizzie Sirett 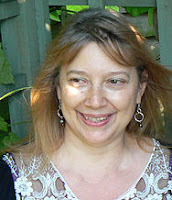 Jane Adams was born in Leicestershire, where she still lives. She has a degree in Sociology and has held a variety of jobs including lead vocalist in a folk-rock band. She enjoys pen and ink drawing; martial arts and her ambition is to travel the length of the Silk Road by motorbike. Her first book, The Greenway, was shortlisted for the CWA John Creasey Award in 1995 and for the Author's Club Best First Novel Award. Jane writes several series.  Her first series featured Mike Croft. There are several books featuring DS Ray Flowers. Twelve titles featuring blind Naoimi Blake, and more recently seven books featuring Rina Martin. Her latest series is set in the 1920’s and features Chief Inspector Henry Johnson. Jane has also written three standalone novels. She is married with two children.
Posted by Lizzie at 12:50