'In The Galway Silence' by Ken Bruen 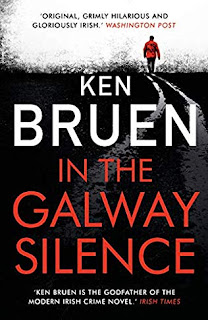 How’s this for an opener?


“I didn’t want to investigate the murder of the twins. To immerse in darkness again was a road I had no wish to travel. Battered and wounded by all the loss of previous cases, I had barely managed to survive. Beatings, attacks, had left me with
Mutilated fingers
Hearing problems
A limp
Lethal dreams
And
A shitload of anxiety that Xanax barely kept a lid on.”

Notice the absence of full stops. Not a typing error, but the deliberate rule breaking style of Irish thriller writer, Ken Bruen – one of the most original voices in crime fiction.

In the Galway Silence is number 14 in the Jack Taylor series. It is grim, brutal and tragic; an explosion of wry humour, pandemonium, revenge and murder.

This latest chapter in Jack’s life is as gripping as ever. The hard-drinking, Xanax popping ex-Garda, attracts violence like no other private eye. This time, it begins when he saves a man bent on drowning himself. Only to discover the old adage made flesh – no good deed goes unpunished.

The man is the father of murdered twins, over privileged, over indulged brats, driven by their sense of entitlement to not giving a toss about anybody else. Not exactly much of a loss to the world, but Jack has saved their father’s life and thus he’s in this for the long haul…

Enter a vigilante assassin Michael Ian Allen, aka “The Silence” – as in his words are the last you will hear – who brings mayhem, destruction and violence into Jack’s busted life, and proceeds to take it apart.

I came to the Jack Taylor novels via the masterful TV series starring the great Iain Glen; bowled over by the lean, diamond hard dialogue, the broken characters and the stunning Galway locations.

From movies to books is not the traditional direction of travel (it’s usually the other way around) but the magic of Bruen’s lean, staccato, prose is impossible to resist. It reads as though we are listening to Jack thinking out loud; the words and phrases spill out in unbroken rhythm. Even when Bruen reverts to paragraphs of more flowing prose, the sentences are some of the best you’ll read…

“A young man, four times with his licence suspended, got behind the wheel of a Toyota Carolla. He had been on a marathon drinking session. At over 100 mph he ploughed into a Mini Cooper, killing a young mother and her daughter.
His defence cited his depression and deep remorse. His life, said the defence, was ruined.
Yeah.
He got eighteen months suspended and a year’s probation.
He celebrated in the nearest pub.
He wouldn’t, he said,
“Drink tequila any more.”
A week later, in a field near a bus stop, he was found with his suspended licence shoved down his  throat, the word silence written in red marker across his forehead”

Ken Bruen’s writing has won praise and fans around the world. No surprise there. The Jack Taylor books make up a
Violent
Angry
Tortured
Darkly funny
Compulsive
Series.

In the Galway Silence drags you into a kind of literary car smash, almost in slow motion, until you are embedded deep.  I read the 310 pages in two sittings. This book, like the best of writing, will make you laugh, make you cheer and break your heart.
-----
Reviewer: Jeff Dowson 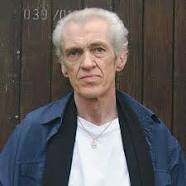 Ken Bruen was born 3 January 1951 in Galway, Republic of Ireland. He was educated at Trinity College Dublin.  He spent twenty-five years as an English teacher in Africa, Japan, S.E. Asia and South America. He is an Irish writer of hard-boiled and noir crime fiction. The Guards (2001), his highly acclaimed first Jack Taylor novel, is to be filmed in Ireland by De Facto Films. His White Trilogy has been bought by Channel 4.

Jeff Dowson began his career working in the theatre as an actor and a director.  From there he moved into television as an independent writer/producer/director. Screen credits include arts series, entertainment features, drama documentaries, drama series and TV films. Turning crime novelist in 2014, he introduced Bristol private eye Jack Shepherd in Closing the Distance.  The second thriller, Changing the Odds, was published the following year.  Cloning the Hate is the latest in the series. He is a member of BAFTA, the Crime Writers Association, and Mystery People.
www.jeffdowson.co.uk
Posted by Lizzie at 15:22