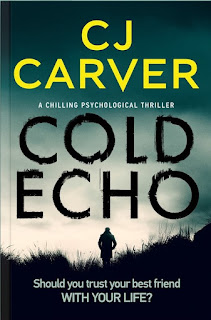 Published by Bloodhound Books,
23 September 2019.
ISBN: 978-1-91298639-2 (PB)
Harry, Lucas and Guy are best friends. Lucas is the eldest and the daredevil of the young group. The book opens with Lucas attempting to light a fire in a barn using a magnifying glass instead of matches. The result of this prank has a tragic outcome which breaks their friendship and the boys all go their separate ways.

Thirty years later, a man’s head is discovered in the woods, skinned and with the tongue cut out.  Harry is now a successful psychotherapist, and his neighbour and friend DI Theo McCannon asks Harry to assist with the case from a psychological view point, but Harry says it is not his area of expertise and is reluctant to do so, until he learns that the victim is one of his old childhood friends.  Could his friend’s murder be linked to what happened in the past?

When one of Harrys’ clients goes missing he is determined to find him, as he is a vulnerable young boy, but in doing so he is drawn back into the past.  And unbidden, a memory from that fateful day in his childhood, a memory he has suppressed, rises to the surface.

The closer Harry gets to the truth the more secrets emerge and with it the third member of that trio of friends. And soon Harry is in grave danger.

As in all previous books this master storyteller racks up the tension and provides an excellent mystery with many twists and surprises along the way.  Highly Recommended.
------
Reviewer: Lizzie Sirett

Caroline Carver was brought up on a dairy farm. At 18 she headed for the bright lights of London and four years later took a holiday in Australia which turned into a ten-year stay, working for the Sydney arm of several major international publishers. Between jobs, she travelled widely and adventurously: back-packing in South-East Asia on $10 a day for nine months, walking in New Zealand, trekking in Nepal and riding a camel through the Thar Desert are just a few of her travel experiences.
Her first novel Blood Junction won the CWA Debut Dagger and was selected by Publishers Weekly as one of the best mystery books of the year.