‘A Knife to the Heart’ by Barbara Nadel 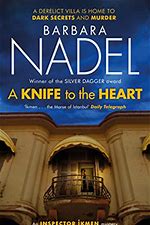 In 1976 a young woman was found dead, killed by a single stab wound to the heart, in the grounds of a beautiful coastal villa near Istanbul.  A murder investigation was immediately launched, but no perpetrator could be found and eventually a verdict of suicide was recorded.  The house was known as Kara Lale Yalı and was the home of Admiral Alaaddin Tonguç his wife Halide and their family - the victim was one of their daughters, Deniz.

Fast forward forty years and the decrepit wooden structure has just been purchased from the cash strapped Tonguç family by Tayfun Yıldırım.  Yıldırım has made a fortune buying and tearing down similar derelict villas in order to transform them into luxury homes for the wealthy - it seems that Kara Lale Yalı is likely to suffer the same fate.  Before demolition begins, however, he allows his niece, historian Suzan Tan, to explore the villa in the hope of finding historically valuable artefacts that will support her latest research project.

The novel opens as Suzan finds a Ouija board amongst some photographs she is examining.  The board intrigues her and she questions Halid Tonguç about its significance.  The response she receives is so bizarre and unsettling that the academic decides to delve further.  She discovers that the Ouija board had predicted Deniz’s death during a séance Halid was leading.  The family members have never recovered from the events that followed and Suzan feels compelled to discover what really happened to Deniz.  She partners up with recently retired police inspector Çetin Ikmen and before long the pair bring to light unpleasant and long-hidden family secrets relating to the Tonguçs.  Ikmen calls on favours from his former colleagues who, although they are currently engaged on their own series of baffling murders, are glad to be working with their past boss.  As the old and new cases develop, the investigations zigzag through the fascinating city of Istanbul which becomes an absorbing character in its own right. The bewitching metropolis is a liminal space in which past meets present and superstition co-exists with contemporary secularism.  The narrative reveals ghosts and demons who travel alongside their corporeal counterparts, blurring boundaries and challenging rational preconceptions.

This is the twenty-first novel in the Inspector Ikmen series but can be read perfectly well as a stand-alone.  A series of delicious subplots revolve around the strong central detective story to create a deceptive and intriguing puzzle.  The author’s style is witty and absorbing and her characters are complex, often conflicted, and always interesting.  The narrative also tackles the impact that followed 2016’s failed political coup, as well as highlighting the ways in which unscrupulous property development disadvantages the poorest inhabitants of Istanbul.

A Knife to the Heart is compelling, informative and entertaining.  It is little wonder that Viacom UK has just announced plans to screen The Turkish Detective a new television series based on the Ikmen novels.  A super read, highly recommended.
------
Reviewer: Dot Marshall-Gent

Dot Marshall-Gent worked in the emergency services for twenty years first as a police officer, then as a paramedic and finally as a fire control officer before graduating from King’s College, London as a teacher of English in her mid-forties.  She completed a M.A. in Special and Inclusive Education at the Institute of Education, London and now teaches part-time and writes mainly about educational issues.  Dot sings jazz and country music and plays guitar, banjo and piano
Posted by Lizzie at 17:00