‘Under the Ice by’ Rachael Blok 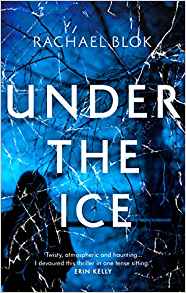 The ancient town of St Albans (formerly the Roman city of Verulamium) is in the grip of a freezing winter. Snow is everywhere and in the park the lake is frozen. Under the ice of the lake the body of a young girl has been found, and there are indications of violence. She is identified as 14-year-old Leigh Hoarde.

Detective Chief Inspector Jan Maarten, formerly of the Rotterdam police, now part of the St Albans force, and Detective Inspector Imogen Deacon are anxious to question anyone who might have seen her on the night she disappeared including the families living along the lane which leads to the park including Will and Jenny Brennan.

Will tells the police that he did see a black car; new mother Jenny was too occupied and too exhausted with looking after her baby son Finn to have noticed anything. Then Jenny and her neighbour Sam realise that they did know Leigh: not well, but she had helped with their baby singing class. Jenny, however, who is emotionally disturbed by exhaustion, keeps thinking that she can hear voices calling on her, ‘Save her.’ The detective’s question some of the staff at Leigh’s school; one in particular, the charming Tim Pickles, was due to give her a lift on the evening that she disappeared. Should he be in the frame? Then another girl, also known to the community, disappears; will she suffer the same fate as Leigh? This is particularly upsetting for Jan Maarten because his daughters had known this second girl and they are very distressed. And the voices that Jenny hears become more vocal. They are linked in her mind to her mother’s death through drowning which happened when she was young. She begins not only to hear voices but to see faces; is this just because of her confused state of mind, or is there something else? She finds a mobile phone in the park; is it Leigh’s or did it belong to the other girl? And was finding it just coincidence, or was she led to it?

The author’s literary style well conveys Jenny’s inability to distinguish what she actually hears and sees from what she thinks she hears and sees. Meanwhile, Jan, apart from the problems of solving Leigh’s murder and finding the missing girl before she too suffers the same fate, has another problem: his former colleagues in Rotterdam have suggested that he come back to them. He is tempted but his English wife would prefer to remain in the U.K. Although Jan seems to have easily transitioned from the police force of a country whose laws and procedures are based on the civil law system derived from the Code Napoleon to that of a country with laws and procedures based on a rather different system, that of the common law, it would have been no easy matter for him at the outset. Did he have to requalify; if so, how much?
--------
Reviewer: Radmila May

Rachael Blok grew up in Durham and studied Literature at Warwick University. She taught English at a London comprehensive and is now a full-time writer, living in Hertfordshire with her husband and children. Under the Ice is her first novel.