‘The Martian Girl’ by Andrew Martin 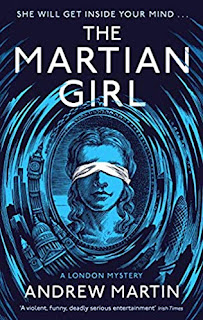 An atmospheric novel set in London and with two storylines, one set in the late nineteenth century and one in the modern day. The connection is a contemporary young woman, Jean, who is fascinated by a ‘mind reader’, stage name the Martian Girl, from the entertainment halls of Victorian times.  Jean is writing a play – or it might turn out to be a novel – about the Martian Girl – her story and her disappearance. Jean is also having a sexual affair with a married man called Coates.

Jean is not the only young woman, apart from his wife, with whom lawyer Coates is having sex. He has fantasies he indulges with prostitutes. He also gets very angry and listens to an upbraiding and brutal voice in his head. We’re not long into the novel before Coates commits a murder.

The reader is invited pretty close into Coates’s head and this is intriguing even while the reader’s distaste for the man grows and grows. Jean herself is a rather ambiguous character and while the reader might want to feel empathy for her, and to some extent does so, the real heroine of the piece is undoubtedly Kate French, the Martian Girl, as written by Jean. Kate’s desperation to provide for her elderly father as his health deteriorates, and her assignations with a seedy stage conjuror in order to gain work, are fascinating. As the novel progresses, with Jean’s quest for the truth behind the Martian Girl – running in parallel with her creative work that tells Kate’s story – somehow getting confused in Coates’s ever more disturbed mind with his own problems in evading suspicion or arrest – it is Kate, as depicted in Jean’s novel, who elicits empathy.

The strengths of this novel are threefold; the characterisation, especially of Coates and of Kate; the way the three storylines twist over each other; and the setting. Andrew Martin’s novel is subtitled A London Mystery, and London, most particularly the nineteenth century version but also the modern-day one, is explored and revealed with strong descriptive talent. What life on the stage was like for a woman in the 1890s shines in bright relief as if caught in floodlights, and this above all makes reading The Martian Girl worthwhile.
------
Reviewer: Dea Parkin

Andrew Martin grew up in Yorkshire. After qualifying as a barrister, he won The Spectator Young Writer of the Year Award, 1988. Since, he has written for The Guardian, the Daily and Sunday Telegraph, the Independent and Granta, among many other publications. His columns have appeared in the Independent on Sunday and the New Statesman. His Jim Stringer novels – railway thrillers – have been published by Faber and Faber since 2002.