‘Three Crime Writers ask What Sort of Roman Are You? 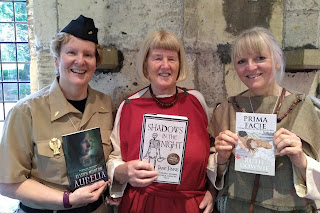 Jane is a Yorkshire innkeeper on the northern Roman frontier, Ruth is a Romano-Briton who’s reluctant to give up the old ways, and Alison is a 21st century Praetorian Guard Special Forces officer.
Quid? (As they say in Rome.)
Rome in the West lasted for over 1,200 years which gives any writer of Roman fiction great scope as proved by Jane and Ruth in their Aurelia Marcella and Ruso Medicus murder mystery series. As for Alison, with Roma Nova she’s taken our global fascination for Rome down an alternative timeline to a different, but definitely Roman, society in the 21st century where villains as well as heroines abound.
Three days of being Roman and not having to explain that you are slightly crazy, three days of sharing, laughing and learning about our favourite time period, we relished the Eboracum Roman festival last weekend in York.
And here we are, flying the flag for Roman crime and thriller writing at the Eboracum Roman Festival In ‘her own words, Ruth (in  photo above on the right) wasn’t looking for the Romans

We only went to Hadrian’s Wall because we thought our children should do something educational on holiday. ‘Sheltering from the rain in a museum, I read, “Roman soldiers were allowed to have relationships with local women, but they were not allowed to marry them.” Obviously, here was a terrific story waiting to be told. All I had to do was find out everything there was to know about Roman Britain, invent things to fill the gaps, and work out how to put it all together in a novel..

So arose the Ruso (and Tilla) Medicus series of now nine books. Her latest, which had its first outing at the festival is Prima Facie, a novella in which Ruso goes home and trouble piles on him from all directions…
https://ruthdownie.com


Jane (centre) has been fascinated by the past ever since as a child she walked along the Roman roads of East Yorkshire and discovered that York’s medieval Minister was built over something even older, a Roman fortress. Her Aurelia Marcella series is set in Yorkshire around a mansio, an official inn/way station and there’s a lot of murder about…
www.janefinnis.com/books/


Alison  Morton writes the award-winning Roma Nova alternative history thriller series featuring modern Praetorian heroines.
A ‘Roman nut’ since age 11, Alison misspent decades clambering over Roman sites throughout Europe. Fascinated by the mosaics at Ampurias (Spain), at their creation by the complex, power and value-driven Roman civilisation, she started wondering what a modern Roman society would be like if run by strong women… Aurelia Mitela is the backbone of the whole series, but what was the conspiracy she had to tackle in her first book Aurelia…?
https://alison-morton.com

For more about the festival plus pictures, read Alison’s account:
https://alison-morton.com/2019/06/05/what-did-eboracum-roman-festival-do-for-me/