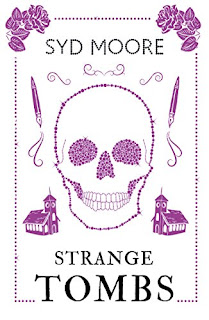 What could be more fun than to spend Hallowe’en in an imposing Essex manor house, old Ratchette Hall, Damebury, with a lot of complete strangers on a week-long Writers’ Course discussing crime and suspense fiction? Especially when the course administrator is such a kind and gentle soul as Graham Peacock? And when the participants, tired after their journey to the manor house, have more than a few drinks and then retire to bed, Graham stays up to lock up and make sure that all is well. And then he dies. Natural causes (heart attack) the authorities decide. But one course participant, the elderly Tabitha Walker, doubts this and she contacts her nephew, the mysterious Monty Walker of the Occult Bureau, who has featured in previous Essex Witch Museum Mysteries, and he in turn contacts Rosie Strange, proud Essex girl and owner of the Essex Witch Museum, and Sam Stone, the museum’s unbelievably handsome, alluring yet aloof curator. Monty has done Rosie and Sam favours in the past, so he feels entitled to ask for one now.

So off Sam and Rosie go, and encounter the mostly elderly course participants, as diverse as only potential suspects in an Agatha Christie novel can be. Apart from the intellectually needle-sharp Tabitha, there’s Imogen Green, writer of psychological thrillers, Scottish Rob Savage, scornful of women crime writers, the mystic Starla Ocean, the two youngest participants, ultra-posh and vicious-tongued, Nicholas Blackman, and his girlfriend, the rather less posh Jocelyn, also Cullen Sutcliffe, writer of serial killer-thrillers, and the embarrassingly coquettish Margot Lovelock. And there’s also crime writer Laura Taylor-Jacobs, one of the course tutors, the other being the internationally famous writer of action thrillers Chris Devlin who arrives late, Sophia, the course administrator, and Carole Christmas, the housekeeper (with that many staff on the scene no wonder the course is pretty pricey). And there is a link between the Hall and the local church where there are tombs of knights one of whose fingers has been hacked off and is found clutched in Graham’s dead hand. This being Essex Witch country, there are lots and lots of manifestations, even the Celtic horned god Cernunnos.

All in all, great fun, ending with a truly Poirot-esque finale in the day-room at the Hall where the killer is unmasked.
But . . . But will Sam ever reveal that he returns Rosie’s desire for him? Readers will be waiting for further developments on this score in forthcoming books in this highly entertaining series. Recommended.
------
Reviewer: Radmila May

Syd Moore lives in Essex, where the Rosie Strange novels are set. Before embarking on a career in education, Syd worked extensively in the publishing industry, fronting Channel 4’s book programme, Pulp. She was the founding editor of Level 4, an arts and culture magazine, and is co-creator of Super Strumps, the game that reclaims female stereotypes. Syd has also been a go go dancer, backing singer, subbuteo maker, children’s entertainer and performance poet, She now works for Metal Culture, an arts organisation, promoting arts and cultural events and developing literature programmes. Syd is an out and proud Essex Girl and is lucky enough to live in that county where she spends her free time excavating old myths and listening out for things that go bump in the night.