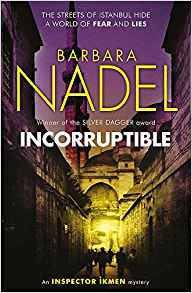 Istanbul, and the latest in this author’s prizewinning series featuring Inspector Cetin Ikmen. The disembowelled body of a young woman has been found in Sulukule, the city’s Roma district. She is Maryam de Mango and she is famous because she is a Christian and her leukaemia has been cured, she claims, by the Virgin Mary at the Armenian Church in Istanbul. But the miracle has not met with the approval of all of Istanbul’s 14 million inhabitants, some of the city’s Muslim inhabitants had vowed to kill her particularly since she had been brought up as a Muslim by her mother although her father is a Roman Catholic. There is little love lost between her parents; although her mother as a young woman had been comparatively liberal when it came to religion, in the changing political atmosphere of Turkey in recent years, she had moved into a much more fundamentalist position, and with her the couple’s three other children. Maryam’s father, who is of Levantine descent and whose family had once been prosperous although now no more. He finds much more sympathy from the priests at his church, particularly Father Esposito. The division of the family on religious grounds has led to an extremely poisonous atmosphere within the family, with the father accusing the mother of killing her daughter, one son accusing his father of sexual intimacy with Maryam, while the mother insists that Maryam must be buried as a Muslim but the father wants a Christian burial for his daughter. Relations have become so bad that the mother, along with the other children, leaves the family home for her own mother’s devout Muslim home. And there is a secret about Maryam’s parentage which, when revealed, accounts for her father’s great fondness for her, more so than for his other children, and also explains her mother’s ambivalent attitude towards Maryam. And, what becomes known during the course of the police investigation, Maryam was pregnant. So who is the father?

I have been very much an admirer of this author’s Arnold and Hakim novels, set in east London. However, this is the first of the many Ikmen novels and there are a great many characters. Fortunately there is a list of characters at the beginning of the book together with an indication as to which of the various ethnic and religious groups each characters belong. Even so, with all the unfamiliar names, it is quite difficult to remember who is who and the reader is made fully aware of the complexity of the population of Istanbul. And something else becomes apparent: for generations, those various ethnic and religious groups had existed side-by-side in a live-and-let-live manner, but now growing intolerance, encouraged by the growing authoritarianism of the Turkish government, and circulating between those groups like a black ground mist, the corrosive influence of ISIS. In that sense, I read Incorruptible as being something like an elegy for the former tolerant Istanbul. And then, after coming to this conclusion and writing this review, the results of the recent local elections in Istanbul and Ankara (March 2019) show that hopefully there is still a future for liberal values in Turkey. Recommended.
------
Reviewer: Radmila May

Barbara Nadel was born in the East End of London. She rained as an actress, and used to work in mental health services. She now writes full time and has been a visitor to Turkey for over twenty years. Barbara writes a series set in Istanbul in which there are 21 books and an historical series featuring undertaker Francis Hancock. She received the Crime Writers' Association Silver Dagger for her novel Deadly Web.