‘Blood on the Rocks’ by Priscilla Masters 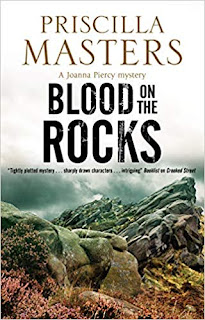 Published by Severn House,
30 April 2019.
ISBN: 978-0-7278-8940-9
DI Joanna Piercy does not take too kindly to being told by her sergeant Mike Korpanski that an old man has gone missing from his care home and she should investigate. Joanna’s response is terse to say the least, Now, seven months pregnant she is fed up with being, as she puts it, ‘wrapped up in cotton wool because of her condition’.   Her husband wants her to stop riding her bike to work and now her sergeant wants her to play safe and look for an old man with dementia who has gone AWOL.

Capitulating Joanna heads off to the Ryland Residential Home. But maybe it’s not as straight forward as it seems. Zackary Foster aged 96 has disappeared and uniform haven’t come up with anything. Joanna quickly establishes that Zachary could not have left the home as it runs a relatively tight ship and everywhere is locked down at night, and Zackary couldn’t have left the home – except that he has.  Further investigation elicits the fact that he wasn’t that nimble on his pins and could not have walked far. The home is surrounded by Moorlands, which have been searched, as had the home.  According to the staff at the home Zackary was a quiet mild man until recently when his teddy bear went missing. So where is Zackary?

Initially, it seemed a bit like a locked room mystery. Or is someone lying?

As the days pass and there are no sightings of Zackary, who appears to have left the home in pyjamas and slippers, Joanna can only surmise that he hasn’t just wandered off, but that something more sinister is at work. Has he been abducted, but why?

As in all her books Priscilla Masters, a master of suspense, poses an intriguing mystery.  I love a mystery. But what to Joanna looks to be a simple matter is indeed complicated by other forces of which she has no knowledge and do not bode well for her.
Cleverly constructed this mystery turns into much more than an old man wandering off. Someone wishes deadly harm and will not stop until they achieve it. Highly recommended.
----
Reviewer: Lizzie Sirett.

Priscilla Masters was born in Halifax, and brought up in South Wales, one of seven multi-racial children adopted by an orthopaedic surgeon and his Classics graduate wife. Priscilla trained as a registered nurse in the Queen Elizabeth Hospital Birmingham. She moved to Staffordshire in the 1970s, had an antiques business for a while and two sons. She started writing in the 1980s in response to an aunt asking her what she was going to do with her life! Winding up the Serpent was her first Joanna Piercy story, published in 1995.  Although that series is still continuing the latest Crooked Street published 2016, she has also written several medical standalones and a new series featuring coroner Martha Gunn, set in Shrewsbury. Her latest book is Deceiver a psychological thriller featuring Dr Claire Roget who is a forensic psychiatrist who has some very unpredictable patients. It is set in Stoke on Trent.
http://www.priscillamasters.co.uk/