‘The Underneath’ by Melanie Finn 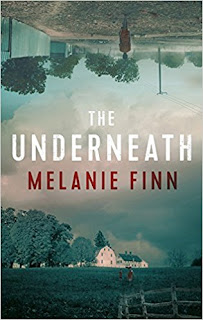 
Kay and Ben, the main protagonists in The Underneath, are haunted by past traumas that intrude into their present relationships.  Kay, a journalist whose professional life was spent reporting from East African war zones, has left this dangerous career to focus on her family.  She feels uncertain about her role as wife and mother, and domestic tensions are evident from the beginning of the book, as she negotiates a family holiday in Vermont with documentary film-maker husband Michael, and her two young children Freya and Tom.

Ben is an inhabitant of Vermont.  He makes a living from felling trees and drug-trafficking, and lives with Shevaunne, a drug addict whom he despises, but with whom he stays because of the bond he has developed with her son Jake, a selective mute.  The author weaves their two narratives together, whilst seamlessly revealing their individual troubling backstories.  Inevitably, Fay and Ben, become involved with each other, but the consequences of this new entanglement places them both in jeopardy.

The novel tackles difficult contemporary issues such as child abuse and drug culture, as well as the cold bloodied destruction of individuals, whole communities, animals and the land itself.  The human beings in the story are damaged, flawed, often masochistic and sometimes ferocious in their brutality.  The tight plot is punctuated by the inner sufferings that torment Kay and Ben as the thriller accelerates towards an ending that is simultaneously terrifying and satisfying.

Finn’s story is as provocative as it is horrific.  Global atrocities are described alongside private disasters which accumulate to become smaller scale, but equally destructive, tragedies for those involved.  The author explores realities many of us would rather not grapple with, yet she achieves this without ever becoming didactic.  The beautiful prose of the narrative subverts subject matter that disturbs and shocks. This is truly hard-boiled crime fiction, savage, visceral and at times distressing.  Be prepared for an unsettling tale of cruelty and suffering, but one that finally champions qualities of love and hope that survive against all the odds.

The Underneath is an extraordinary and challenging book, and one that I could not put down.
------
Reviewer: Dorothy Marshall-Gent

Melanie Finn was born in Kenya, where she spent the first twelve years of her life. She was educated in the United States and has lived and worked on four continents. She has worked as a screen writer and journalist, and is the founder and director of the Natron Health Projecy, which brings health care to Maasi communities of Tanzania. Her first book Away from You was published in 2004.